World Championships for 6yo Dressage Horses – 2018

The 6 year old World Championship Final also did not disappoint in terms of food for thought as a breeder. These are some of the rides that caught my eye.

First in was the KWPN breeding stallion Hermes, by the Trakehner stallion Easy Game (a son of Gribaldi and the sire of Millennium). He has a naturally uphill frame and good neck set and the trot had a lovely swing over the back. I also liked his attitude, so important to consider when breeding a dressage horse. All three paces were equally strong and he scored a 9 for both the trot and overall impression and held on to the lead for quite some time. Eventually they ended up in Bronze Medal position behind two exceptional stallions. Seeing him today consolidated my view that his sire Easy Game is one for me to consider for my Trakehner breeding programme.

Easy Game was also the grand sire of the Johann Hinnemann owned Matchball OLD, a son of Millennium out of a De Niro mare. Millennium reliably passes on a very light footed and supple trot and this was probably the highlight for Matchball. The trot half passes in particular were very good and a submission mark of 8.9 reflected this. The gelding ended up just off the podium in 4th.

I had very nearly used Total Hope this year on one of my own broodmares so I had watched with interest how much he improved from the first day to win the consolation final,  qualifying for the Final today. Another Totilas son ( I seem to be developing a taste for them) he is to my eyes a similar frame and type to the 7 year old Totilas sons who competed earlier today. His walk was very good in front and behind, until some tension marred the transition to collected walk. And the stellar canter was ground covering  with really good jump and an active hind leg.

Total Hope’s dam was the international star Weihegold by Don Schufro, who is proving to be an exceptional dam sire.  I think on the right mare (a typey one who has a good trot but needs the canter improving) he could be very interesting but I suspect like his sire he is not going to be a foal maker.

An extremely popular breeding stallion in Europe but the less attractively named Hesselhoej Donkey Boy was very extravagant in all three paces but I was actually put off by how much he flings his front legs sideways from the shoulder in trot. This must be my Britishness coming through but I dislike this leg flinging action. The hind leg is also very active but is this a hind leg that could compress for the collected work? I may have to eat my words when this horse gets to Grand Prix but for now I will observe and not breed to this type of horse.

Breeding stallion Ferrari OLD was presented by yesterday’s Gold Medal winner Andreas Helgstrand and caught the eye from the moment he came in. Huge presence, cadenced trot and a very active canter. But there were moments of loss of balance and the walk suffered a noticeable loss of rhythm. The judges marked him quite harshly considering the overall test looked better than in the qualifying round but there were some very good moments. However I think he was better last year as a 5 year old.

What interests me personally about Ferrari is that he is by the Fidertanz son Foundation out of a mare by the half Trakehner Grand Prix stallion Hotline. I used Foundation myself on a pure Trakehner and bred an exceptional filly foal who has inherited the powerful frame from her sire, and the type and huge walk of her dam. Ferrari himself looks to be a very big horse and I watch his development with interest to see how he develops the strength to carry that big frame and big movement.

Got to love a chestnut – and the stallion that I came away from the 6 year old final with the most interest in , even before the final marks were announced, was D’Avie, a son of the late Don Juan de Hus out of a Londonderry x Walt Disney mare. I had enjoyed seeing him in February at the stallion presentation at Klatte and he has improved again over the summer. He has a lovely frame, a very well set on neck and the canter was such a highlight. Great jump, active, even if he anticipated the odd flying change. Not always perfect transitions but freedom of the shoulder in trot and great expression without any of the over the top leg waving.

The judges agreed – 9.8 for trot and 10 for the canter! Overall score of 9.26 and he held on to become the new World Champion and flying the flag for the Hanoverian Verband. 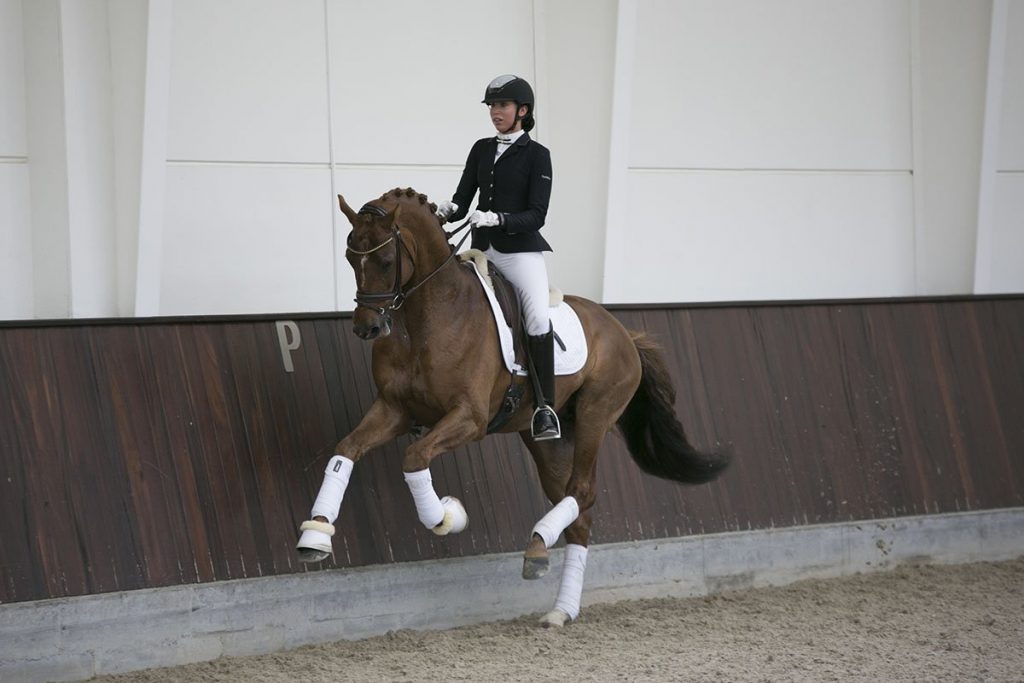 Last to go and winner of Friday’s qualifying round was Villeneuve, a Vitalis x Danicer chestnut stallion, who had been Reserve Champion when licensed in Westphalia in 2014. He  needed to pull out all the stops to overtake D’Avie. The highlight for me was the medium canter, expressive and uphill. Little losses of balance in one change, the first half pass and the medium trot did affect the submission mark. But despite the mistakes this was still enough for a final score of 9.24 and the Silver Medal.

Sadly no British interest at all in the 6 year old Final, apart from the fact there will be some foals born in the UK this year and next by some of the stallions competing today. But even so, some interesting observations when planning our own breeding programmes for the future.