This year the WBFSH Annual General Assembly is being held in Denmark, hosted by the Danish Warmblood Society and Blue Hors Stud. The Assembly is a chance for studbooks from around the world to get together and discuss common issues and find solutions, as well as strengthen ties with fellow breeding enthusiasts. 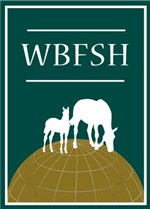 With the imminent threat of Brexit looming on the horizon of the British breeding industry, it is more essential than ever that we learn strategies and best practise to put us on the front foot. Sadly only two British studbooks have sent representatives, which may be an indication of how distant the majority feel from what is happening in Europe and the rest of the world.

The first day’s discussion centred around data sharing and passport compliance with European Directives. With such uncertainty over any future deals with Europe, it is more crucial than ever that we (the British PIOs and breeders) understand how any new European Directives will be implemented, and how any compliance will affect the import and export of semen and horses. Our potential business partners in Europe need to have confidence in our systems and records, before they will purchase from us.

The second half of the day was an absolute treat with a trip to the famous Blue Hors Stud. The CEO of Blue Hors, Ole Magnus Petersen gave the group at introduction to the values of the stud and their philosophy of combining the very best of breeding and sport. The venue combines a leading stallion station, youngstock rearing, sport horse training and sales, and a wonderful competition venue.

Our guided tour by Stud Manager Esben Moller, included a visit to the foal barns, where around 60 colt foals (mainly purchased with some homebreds) were over-wintering. After a first winter in the barns (which all have lovely outdoor hard surface areas attached), the colts are turned out to pasture in large groups where they remain until they are either selected for production for stallion licensing at 2 1/2 or backed for a sport career at 3 1/2. It is felt that being allowed to live freely outdoors develops tougher stock who are far less likely to develop soft tissue or ligament issues when they come into work. The land is on sandy soil and free draining, and the young colts come down for feeding twice a day. 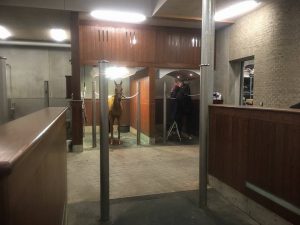 We were also shown the incredible facility for the ridden horses, with a central hub of tacking up bays, wash up boxes, solariums, rug and tack rooms. The stallions were all housed in this complex as we are outside of the breeding season, and we were lucky enough to be introduced to the great Don Schufro, Grand Prix stars Zack and Hotline, and some of the up and coming stallions. 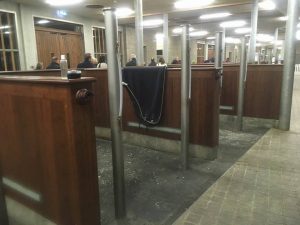 In the main show arena, we also got to see some of the 2 1/2 stallions shown in hand and Farell, Dreamline and Zalabaster under saddle. Esben explained how well the Zack and Don Schufro combination worked for them, with the power and strength of Don Schufro daughters, teaming up with the quick reflexes and the lift from Zack’s Dutch lines. What was also interesting was the view that Blue Hors wants stallions who do not suffer from soft tissue injuries and they have found Jazz crossed onto Ferro dughters has given them that soundness and health to compete in the higher levels of the modern sport.

Producing world class Grand Prix horses is a major focus and the Blue Hors team are focused on international sport and potentially the Tokyo Olympics. With the attention to detail at every corner, and the quality of the horses, it is easy to believe we have just seen at least one medallist of the future. 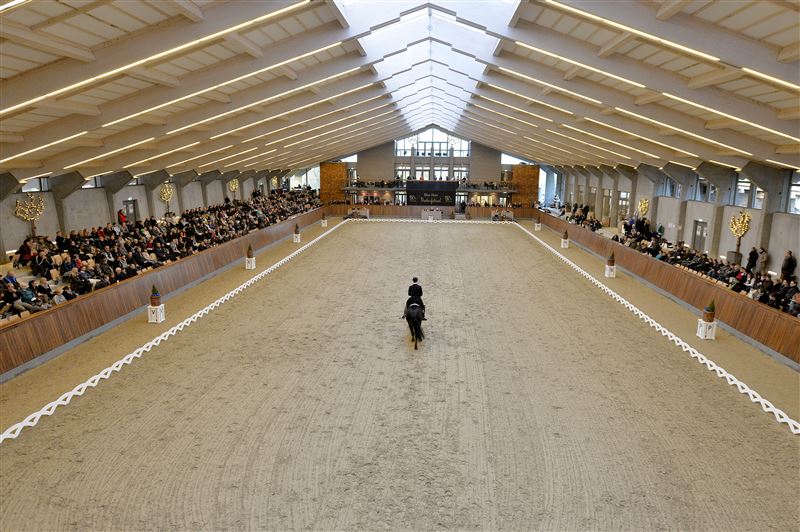