With the recent news that the BEF’s breeding operations are no longer to be run centrally but instead be put out to tender, some British Breeders have been expressing concerns that this is backward step for the industry. Some breeders are worried that without the backing of the BEF, buyers won’t consider a British bred foal, or assume that there isn’t the quality they need here in the UK.

But if you look outside of the Futurity, there are more initiatives than ever being launched to give UK breeders a shop window.

The British Breeder’s Network runs a series of Mare, Youngstock and Foal shows through the Summer months, culminating in their championship show at Moreton Morrel College on 9th September. The aim of the series is to not only offer breeders a opportunity to get their stock out, but for potential buyers to view a number of sport bred youngstock in one central location.

The Anglo European Studbook recently held their second Elite Foal Auction in conjunction with Brightwells. Again this was marketed as an opportunity for buyers to view a selection of quality foals in one central location. With the auction being held against the background of Addington’s British Young Horse Show Jumping Championships, the best of the jumping bred foals made strong prices. Although the clearance rate was not as high with the dressage foals, there were some serious buyers there, including at least one British team rider and trainer. With the strong marketing campaign and professional catalogue, the event looks sure to establish itself in the calendar as the place for serious riders to source their next star.

Another very successful foal and yearling auction was held earlier in the year as part of the Bolesworth International Horse Show. The price highlight went to the British bred son of Olympic Champion Big Star – Tinka’s Star. The beautifully bred colt made £92,000, a fantastic price for a foal in any country.

Two years ago the British stud book SHB (GB) launched the £50,000 Young Event Horse Grand Slam. The scheme offers a financial incentive to owners to buy a British bred youngster, while ensuring that the breeder still gets a substantial part of the prize fund. Although the scheme is still in its infancy, it is a much needed boost for breeders of event horses.

SHB(GB) also has the new Breeder’s Cup aimed at the in hand horses, with a £1000 target to be split between the owner and breeder of the Breeder’s Cup Champion at next year’s Hunter Show. Both these initiatives need a lot of publicity to make potential buyers aware of them.

Almost more important than any scheme or marketing initiative is the success of British bred stock at International level. Riders will look to the UK market if they see the best in the sport choosing to ride horses bred in this country. When that does happen, we really need to draw attention to it.

In the sport of dressage in particular there is still a perception among buyers that they need to travel to Germany or Holland to buy their next partner. So it was so refreshing to hear none other than Carl Hester, in an interview for the BBC, name both Spencer Wilton’s Super Nova and his own Hawtins Delicato, as two of the most exciting horses in British Dressage who will help strengthen our bid to reclaim Championship Gold Medals.

Winning Gold Medals – that has to be the best shop window of all. 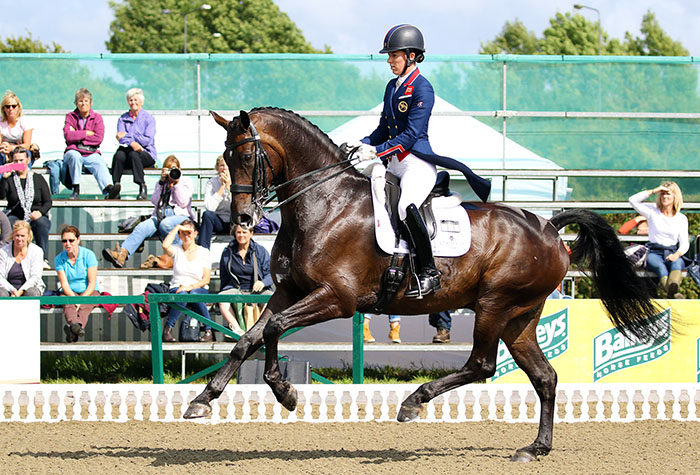