Hawtins Werona is a performance tested Elite British Hanoverian mare whose early promise has blossomed into a successful dressage career. She was bred by Judith Hawtins at Hawtins Stud and was competed by the Stud’s rider Bryony Goodwin up to Advanced Medium level. In 2016 she was purchased by 18 year old Bridget Tate with an eye on future Young Rider competitions and eventually a breeding career.

In a short space of time the new partnership racked up a sequence of wins at Medium level and finished just outside the top ten at the 2016 BD Nationals. 2017 has started the same way with a double victory at Myerscough. By the end of this year the aim is to start campaigning the 8 year old mare in young horse PSG tests. 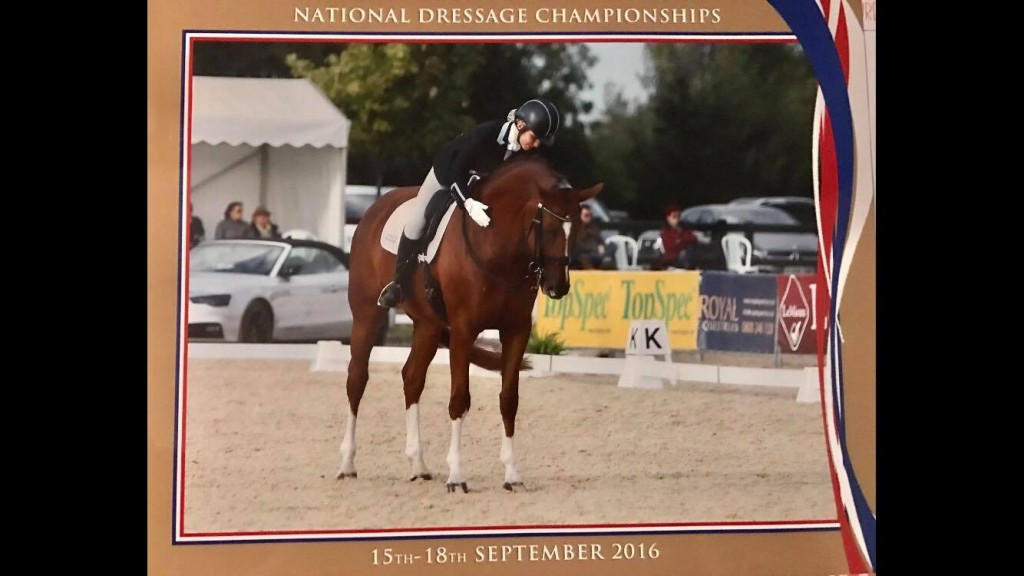 Bridget and her mother looked in Germany and Denmark for the right horse but had 4 horses fail vettings due to OCD chips. Eventually they started to look in the UK, and went to Hawtins Stud in Gloucestershire. Bridget felt she could find the same bloodlines and attention to detail that she had found in Germany, but produced with sympathy and care to ensure a sound long term future. After her experiences Bridget says “I don’t think we will ever go to Europe horse shopping again as we have some great studs and top quality horses being bred here now”.

Werona’s breeding career may start this year through embryo transfer and the fact that she is British bred has helped the pair secure sponsorship with DonnaDiva Equestrian for 2017 which Bridget is very grateful for.

Werona is a daughter of the Hanoverian State Premium mare Santina, who had a successful competition career as well as being one of the foundation broodmares at Hawtins Stud. She competed at Regional level up to Advanced Medium. Santina is a half sister to the Grand Prix mare Ramina K and 2 licensed stallions. The immediate family has also produced the Grand Prix stallion Barclay, and the good stallions Dramatic (Young Horse World Champion 6yo), Flanell, Scolari and Rhodes Scholar. Santina’s damsire Akzent II is particularly important in maternal pedigrees as he is the dam sire of great horses such as De Niro, Dimension and Pik Labonics.

Santina has another good young daughter Hawtins Sorprese (by Sarkozy) who has built on her success in young horse classes, and is now winning at Elementary and a son Hawtins Cielo (by Cardinar) who is also at Elementary.

Werona’s sire Wolkentanz II was Reserve Champion of his 100 day performance test. He competed at the Bundeschampionate and the Young Horse World Championships, and up to Intermediare I level. He produced a good number of sporthorses and state premium daughters before being exported to Canada in 2009.

His sire Weltmeyer was one of the most important stallions in Hanoverian breeding and his influence as a broodmare sire is of particular significance. The combination of one of the best Hanoverian mare families with the Weltmeyer sire line makes Werona a valuable asset for the Tate’s future breeding program.