The Yorkshire branch of the Sport Horse Breeding studbook is one of the most active, recognising Yorkshire bred stock at an annual awards dinner, running a popular summer show, and organising a stallion parade. For 2017 the stallion parade was held at Richmond Equestrian Centre on Sunday 12th March. A huge thank you to Sally Coles Photography for providing images from the day.

Overall this was not an event for breeders looking to produce high level dressage horses or show jumpers. A lot of the stallions were more suited to breeding show horses or club level all rounders. The sound system was also not very clear as most of the spectators I was sitting with couldn’t decipher what was being said about each stallion which was a shame. The music was also refusing to co-operate which lead to a more muted atmosphere. Having said that there were some nice stallions for eventing breeders and a very good initiative to offer spectators a chance to win one of 3 x £100 vouchers towards a stud fee. And there are many breeders looking to breed for the show ring, or wanting to promote one of our native breeds that were on display.

This attractive hack and riding pony sire was shown in hand. A straight mover with a good shoulder and a nice length of rein, he could have a little more length to his hindquarter. His sire Small-land Tapdance is now gelded but has won in the show ring at the Cherif and NPS Championships and now competes in dressage. The Thoroughbred dam Competant Lass is a daughter of the National Hunt stallion Cloudings. 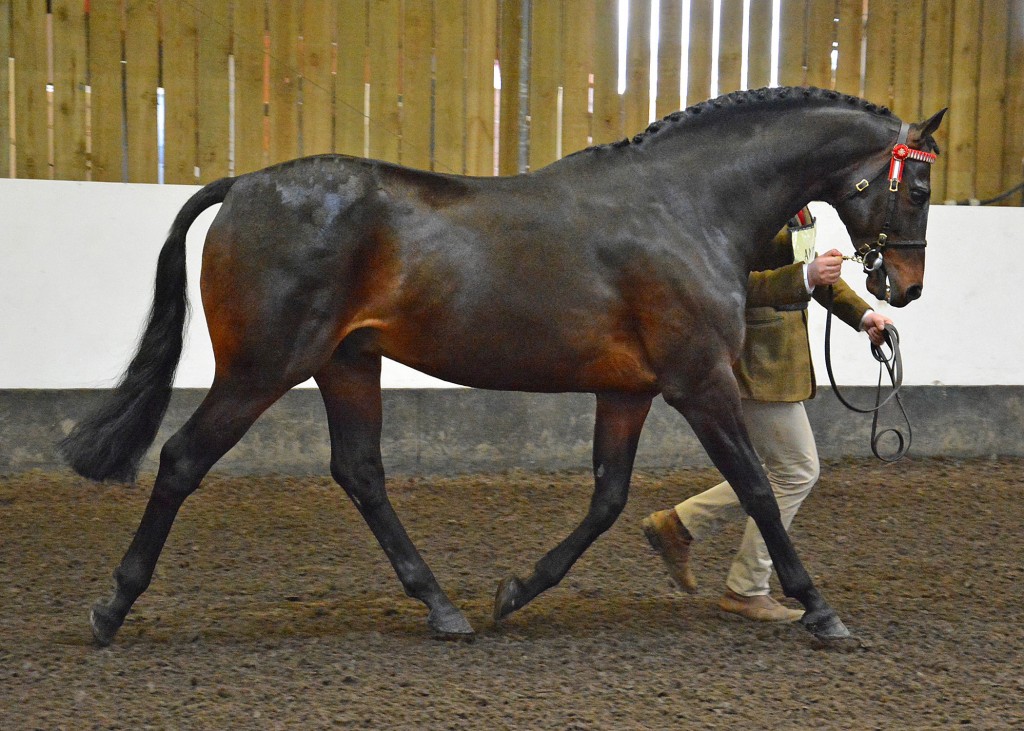 This stallion was not at his best on this day, looking very green with his jumping and lacks some of the quality of the other Irish Draught stallions shown.

One of two Cleveland Bay stallions on show, who would be suited to breeding hunters and show horses. He had a lovely strong topline and carried himself very well. His hocks are set a little high. 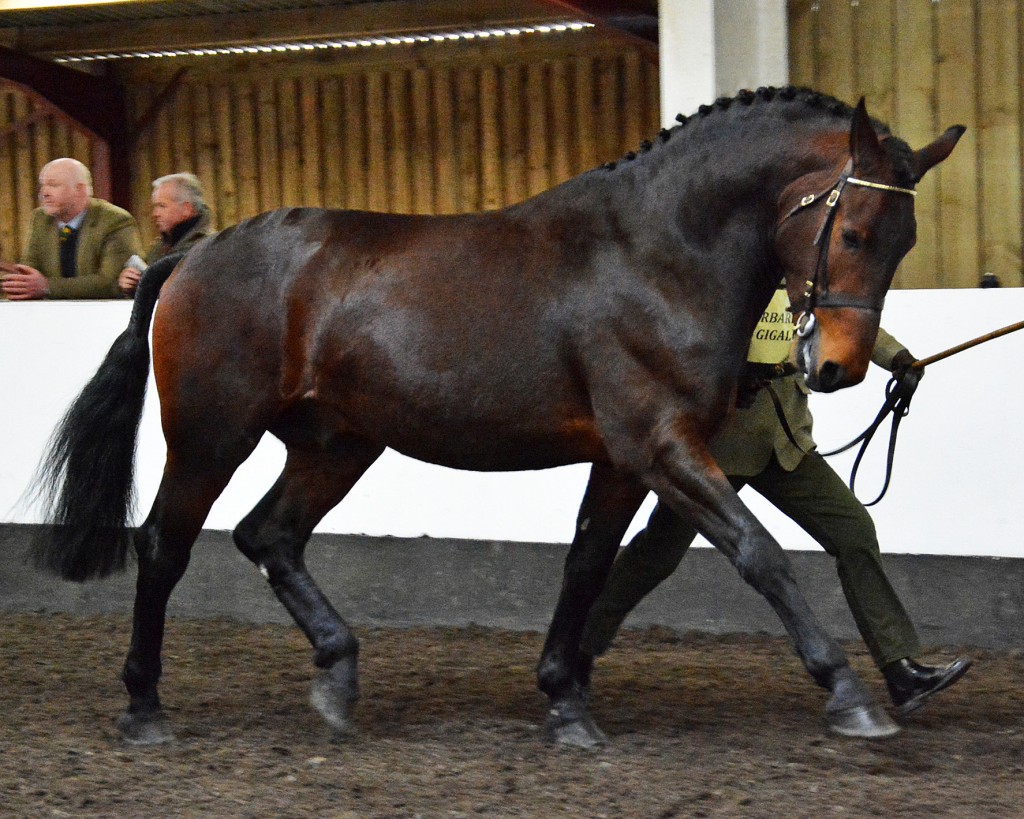 This coloured stallion has competed at BE100 level but did not jump at the show. He moves with some knee action indicating a tendancy towards jumping but could show more pelvic tuck. He would need a mare with a strong loin and some blood. His sire Samaii was performance tested in Germany and has sired major show ring winners. The dam was a cremello Hungarian bred mare, with some arab blood further back.

A handsome horse who was longer legged and stood over a lot of ground than you might expect from his pedigree as though carrying more Thoroughbred blood. He has a well shaped hindquarter and a very good walk. He was green over the fences. His sire Crosstown Dancer was a very influential show hunter sire and his dam was Reserve Champion Broodmare by the Royal Dublin Show. 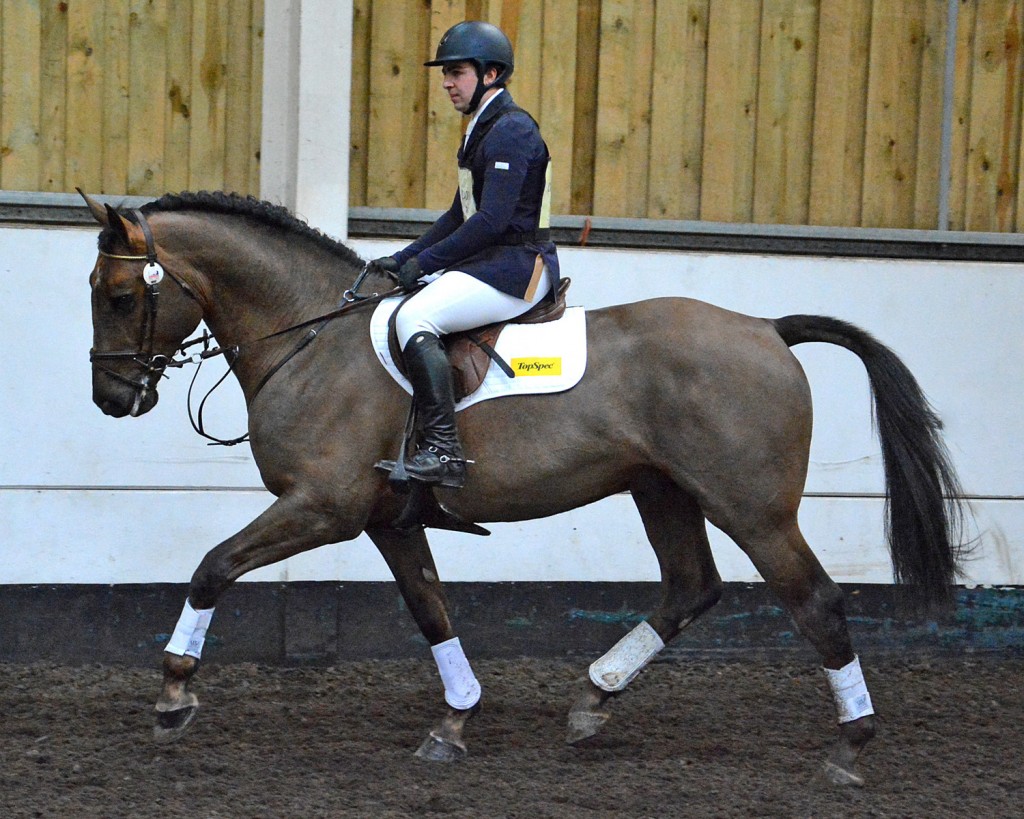 Another older stallion, he has plenty of size and substance without being too old fashioned. He is now a BE schoolmaster for a young rider. He has won a CCI* at Osberton. The trot has little knee action which is surprising for a jumper. His sire was a dual purpose stallion and the dam sire Calypso II was one of the most important sires in Holstein and in the Hanoverian breed.

A very good looking and athletic young horse, he performed his usual party trick jumping the banners held up by the team from Future Sport Horses, and was one of the most interesting young stallions on display. He qualified for the BE Young Horse Championships as a 5yo and was winning at BE100 level in 2016.

His sire Grafenstolz hails from one of the best Trakehner families. He qualified for the Bundeschampionate in all 3 disciplines and was the 6 year old World Champion at Lion D’Angers. In 2016 he was named the Trakehner Stallion of the Year based on his offspring’s credentials. Future Illusion’s dam produced Olympic Silver Medallist Windsome Adante and a number of BEF Futurity Elite foals.

This Dutch bred pony showed a lot of essentials needed in a pony eventing sire. He was economic over the fences and could lower and lengthen the canter with ease. Combined with a very quiet and relaxed temperament which is essential in breeding good children’s competition ponies. He is the sire of the 2016 Supreme Youngstock Champion at the SPSS grading Fairlight Rhiannon.

This SPSS graded Connemara stallion went better today than I have seem in the past with more fluency and expression although I was surprised he had a neck strap on. He could have brought the hind leg further under his body in canter. He has good bone and would add substance onto a lighter made mare. He hails from the same sire line as the good sport pony sire Frederiksminde Hazy Match and the damsire Robin Hood is also the dam sire of the top 138cm jumping pony and stallion Grey Palace.

This very attractive 4 year old was verging on the side of carrying a little too much weight but still impressed with his active paces and strong topline. The canter was really round and balanced. Although his bloodlines have produced a lot of successful show ponies, his grandsire Frederiksminde Hazy Match is the sire of Pony European eventers and Grand Prix pony show jumpers. Killour Star looks a good option for both siring both eventing and working hunter ponies.

This young horse was a quality Thoroughbred type. He is still a little narrow but obviously is still growing. He was a little green over the fences but looks to have a lot of potential in the eventing sphere. His sire is an advanced eventer whose sire and dam also competed to advanced level. Likewise Namche Bazaar’s dam High Times evented to 4 star level so he certainly has the right pedigree for the job. 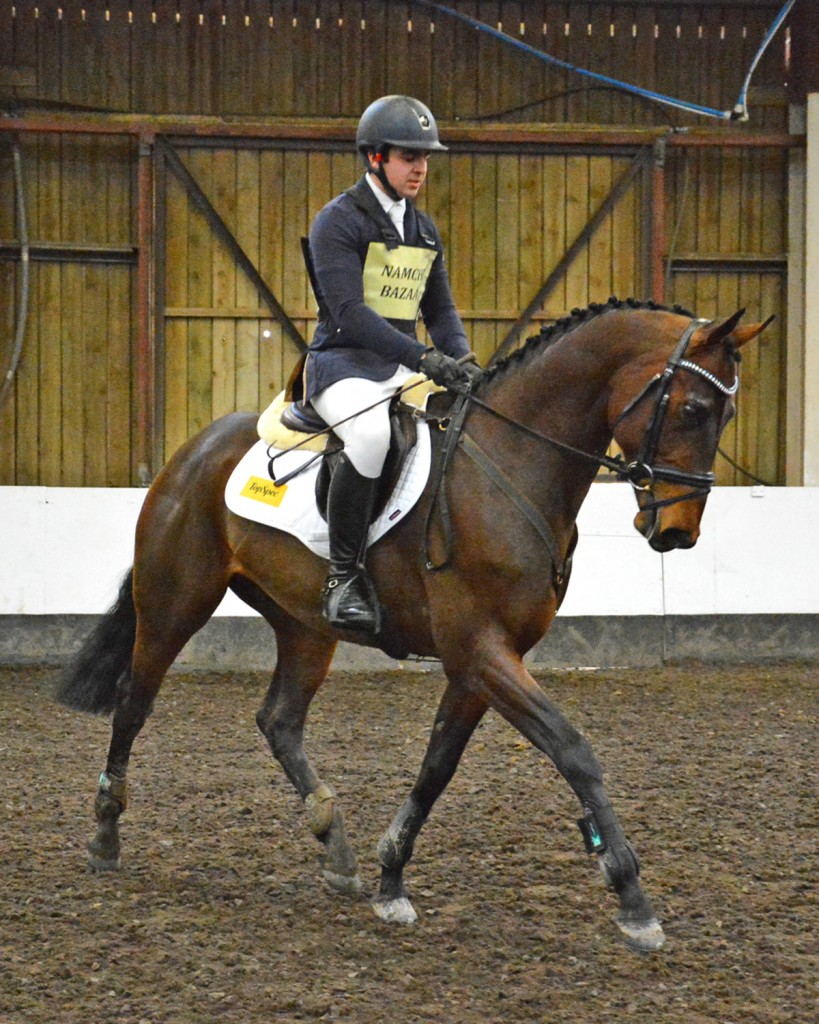 This pony stallion has recently started his dressage career. He movement could be more open through the shoulder but he was very obedient. His sire is a very successful sire of sport ponies in Germany with his offspring having a fantastic record in the Bundeschampionate. The dam interestingly carries Irish Draught blood fairly close up through the Grade A show jumper Enniskeane Prince.

Shorter in the leg than the other CB stallion who was shown. He is a Life Premium stallion with good bone.

The addition of a Thoroughbred motherline made this 8 year old stallion a more athletic and modern stamp than his sire. He jumped with a nice bascule for an eventer although this is his weakest phase in BE competitions. He had a top ten finish in his first Intermediate last year. He has BD points with wins from Prelim through to Elementary, and qualified for the Regionals at Novice. His sire is discussed later in this article, and the dam is a Thoroughbred mare by the stakes winning stallion Silver Wizard.

This stallion impressed with his soundness and clean limbs, despite being 19 years old and having had a good career at advanced eventing. He was placed 3rd at Hopetoun CIC** last summer and won a CIC** as a 17 year old. He jumped a decent sized fence and moved very nicely with an expressive trot. With his blue blooded eventing pedigree, I am surprised he is not considered more often by eventing breeders. His sire produced top international eventers such as Cool Mountain and Kings Temptress. His damsire Ben Faerie is famous as the sire of stars Priceless and Night Cap. 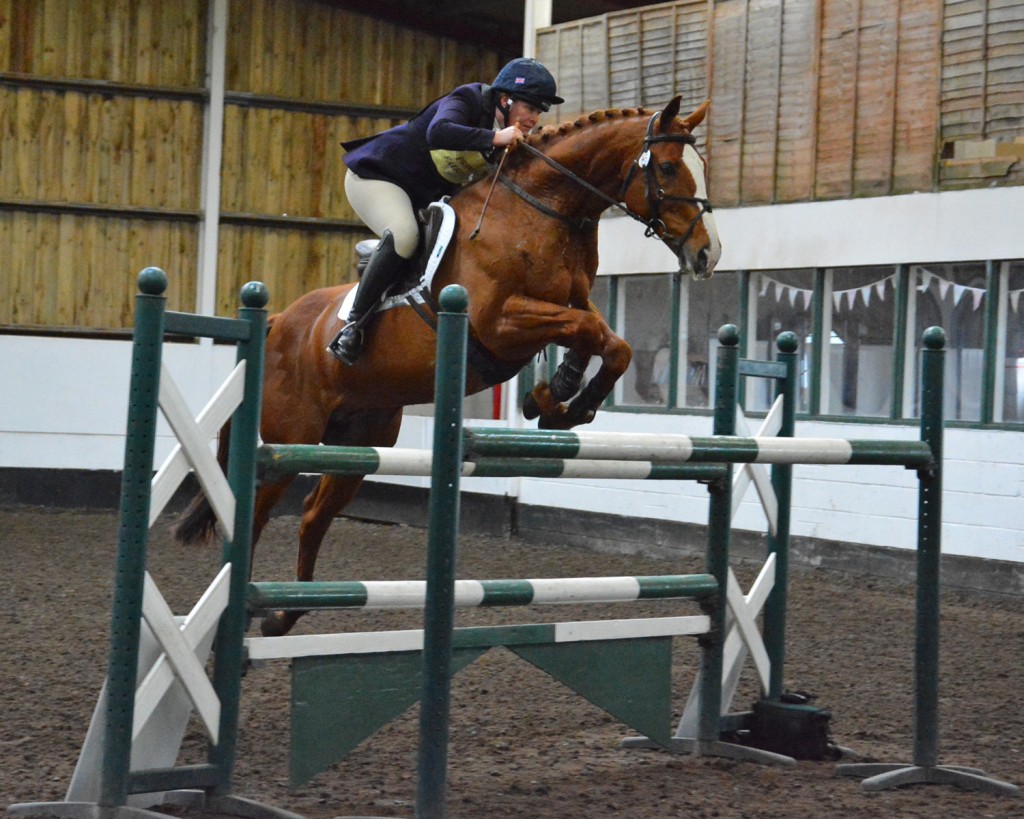 This Oldenburg graded and 30 day tested British bred stallion was the most advanced dressage stallion on display. He has a very good Hanoverian motherline and that older style blood is evident through his strong frame and limbs. He could have a little more length of rein. The canter is his best pace as the hind leg flexes better under his body in this pace. Samaii has produced leading county show horses as well as stock competing in dressage. His sire Sambertino has sired Grand Prix dressage horses and a Para Olympic competitor. The dam produced another licensed stallion son and is from a Grand Prix producing motherline.

Shown in hand this was a short coupled, straight moving stallion with a very attractive honest head. A little straight through the hind leg but with good short cannon bones. Sire and dam sire both produced a lot of top show horses.

This handsome little stallion jumped very nicely, and showed his carefulness and ridability. The trot could have shown a little more reach. He was a Bundeschampionate finalist and was competed successfully by an amateur up to 1.40m level in Germany. He is approved with numerous studbooks and has already has produced a licensed son, and good young horses in both eventing and show jumping. His sire Silvio I produced a number of good small tour dressage horses but is best known as a sire of show jumpers, including the international superstar Shutterfly, who is Sir Shutterfly’s full brother. Their dam Famm was Hanoverian mare of the Year in 2007 and has produced other international horses such as Let’s Fly and Remedi D. The damsire Forrest brings valuable Thoroughbred blood to the equation, and Sir Shutterfly clearly demonstrates the blood influence of his pedigree.

This 24 year old stallion has had a very successful show career and qualified for Olympia last year. He is very wide barrelled and could have more length of leg. He has quite a lot of knee action. He has sired show winners including HOYS champion Electric Storm. Although his sire line is unknown, he is out of a Thoroughbred mare.

This 21 year old was shown in hand. He is quite small and showing his age across his back. He has a well shaped hindquarter and short pasterns. He has stood for the majority of his career in the USA. He carries some very well known RID bloodlines such as Slievenamon, Skippy and Colman.

An old fashioned stamp who has previously evented to novice level and show jumped to newcommers. He had average scope, jumping a little hollow, but was easily ridden in a snaffle. He is graded AES and his licensed son Pennine View Silver Concorde was mentioned above. His sire Concorde needs no introduction as a leading sire of international show jumpers, and the damsire Ramiro Z is the sire of the great Ratina. The motherline has also produced the AES graded 1.60m jumper Powerfee.