The second section of the Harthill Stud Spring Seminar consisted of a dinner and presentations from an eminent panel of guest speakers, sponsored again by Equerry Feeds. The evening was not as well as attended as last year, perhaps as the emphasis was very strongly focused on selling young show jumpers through auction, which on the face of it may not have such a broad appeal. However the key messages had relevance for all sport horse breeders. 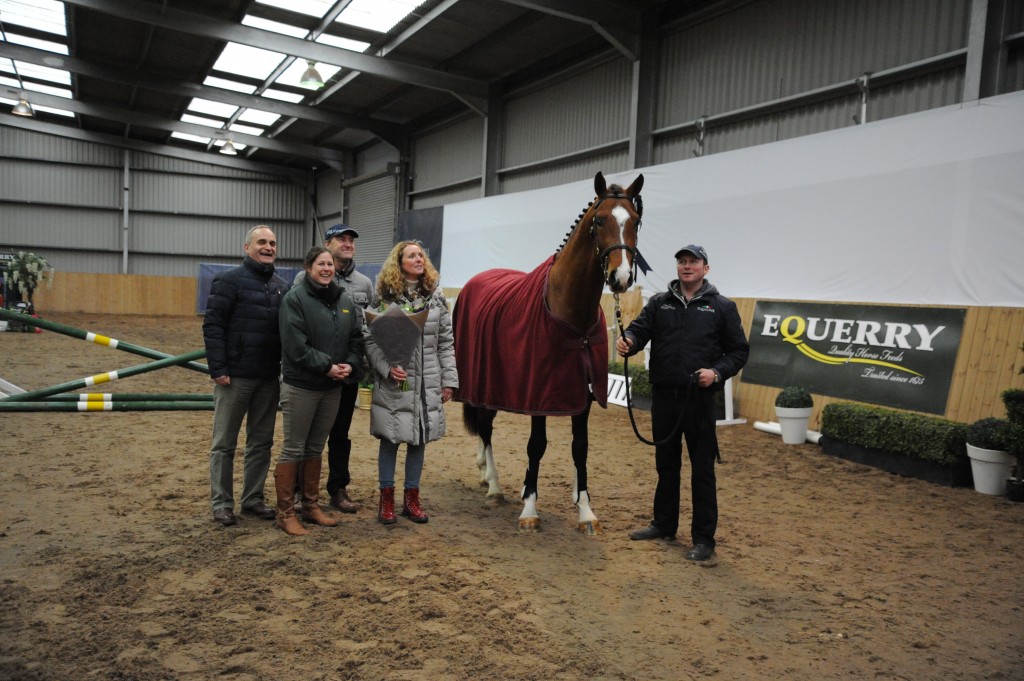 The first speaker was Jan Greve, the renowned breeder and Olympic team vet, perhaps most famous for his great stallion Voltaire. 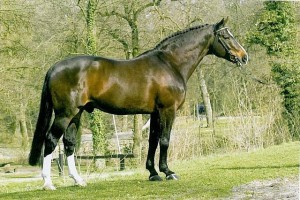 His relaxed style and hilarious statements made him a very entertaining speaker. His lecture was titled ‘Plan to Perform’ and his opening statement hit a particular cord with me – “The only thing that counts is the mare”. He will only have mares in his breeding program that have black type pedigrees. That is to say that there must be a Grand Prix performer or a mare that has produced a Grand Prix performer within the first three generations of the dam line. Jan says that the Dutch success in breeding jumpers owes much to securing great filly foals from the best motherlines. “If you put semen in a sh*t mare, nothing will happen”.

Knowing your mare’s strengths and weaknesses dictates your stallion choice. Jan said that because he has such strong motherlines in his breeding program, he is happy to breed directly from his young mares after he has assessed their scope, attitude and intelligence through loose jumping.

The next step in producing your top show jumper is to get your mare in foal. If you are not retaining your mare solely for breeding, then embryo transfer is an increasingly common option. However Jan and some members of the audience felt that extracting an embryo from the donor mare can affect her performance and Jan explained that he was now using a process called ICSI (Intra Celluar Sperm Injection). Eggs were extracted from the mare and inseminated in the lab. The embryo could then be frozen until needed. When asked about the best recipient mares to use , Jan felt that a good active warmblood mare was a better choice than a heavy cob or draft mare – “If mama is eating hamburgers all day, so will the children.”

Once the mare is successfully in foal, the embryo must be correctly fed during pregnancy. Dutch research has proved that poor nutrition leads to a lot more diseases in the young embryo. Once the foal is born, correct feeding of the foal continues to be a priority, with turnout on good surfaces to promote the correct growth of healthy tissue. The good genes must get the chance to develop into top performers.

Jan also felt that pasture management was a key issue in the rearing of the young sporthorse. Parasite infection when young could have big implications when the horse is under stress in competition as an adult.

Jan finished with some key points on how to select young horses that will be profitable when they are ready to be sold. He stated that for show jumpers conformation is not the most important criteria as long as it does not impede performance. “I would rather have a Rolex in a plastic bag than a Swatch in a leather box”. In dressage the judges like to see a well made beautiful horse, but in show jumping the horse just needs to have the right conformation to stay sound.

The horse must have athletic ability, and be able to open and close their frame easily. They must be healthy, and that doesn’t necessarily mean good X-rays. Jan said 80% of the lameness issues he sees are soft tissue and ligament damage. Finally the horse must have intelligence and want to work with the rider to do the job.

At the other end of the production line was our next speaker – Genevieve Megret from Haras de Clarbac. A leading owner of show jumpers in France, Madame Megret owns Penelope Leprevost’s top international horse Vagabond de la Pomme. She explained with the help of a translator what she looks for when buying a young prospect. 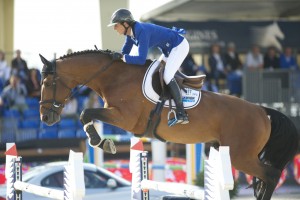 A top show jumper can be any size or appearance, and can jump in a good or bad style, but the most important thing is the brain and willingness to work for the rider. He must be intelligent to the fence, and careful without being timid. He must have a lot of power from the hind end, which allows the canter to be adjustable. And he must also have enough blood to cope with modern technical courses. Finally he must be healthy enough to stay sound through his career.

When she is selecting young ridden horses, she does not necessarily look at the bloodlines, but then she has noticed that good genetics and a strong motherline always rises to the top. Therefore for the breeders she is buying from, the mare is the most important part of the equation. She says you have to train your eye by looking at a lot of horses, and learning through observation which young horses go on to succeed. Having good advisors you can trust is essential as you cannot do everything yourself.

Madame Megret tends to buy between the ages of 4 and 7 as their potential is easier to assess. The rider must try the horse more than once and you can then compare your observations with the feeling the rider gets. Interestingly although her top horse Vagabond is a breeding stallion, she does not like to use ET for her mares that are in sport. She feels that the process of harvesting the embryos interrupts the careful husbandry and affects their results in sport.

Bernard was talking to the group about the highly successful French sporthorse auction company – Fences. He had come over to the seminar to judge the second day’s loose jumping competition.

He explained that he had been selecting horses for 26 years and he viewed his job to be working on behalf of the breeder. The auction is designed to help breeders sell their stock for the best prices. The auction attracts buyers from all over the world and with such a tough selection process, great wine and great food, has become a mecca for serious buyers.

He looks for good 2 and 3 year olds from the whole of Europe to fill his two sales. The Elite sale consists of 80 3yo jumpers and around 35 foals. He looks for a good canter and a horse that can use his body completely. The horse must be intelligent and have scope.

His visit over the weekend was the first time he had come over to England to look at horses for the Fences auction. As Bernard pointed out, if the breeder’s don’t sell, they don’t continue to breed, and the auction needs the breeders.

Tom Malone is a National Hunt racing bloodstock agent who has purchased among others the Champion Chaser Dodging Bullets. Tom outlined what he looks for initially as a buyer, which is a genuine black type pedigree. He looks at between 5 and 6000 horses a year, to buy 100 to 200. Like the previous speakers he confirmed the best way to learn how to select top horses was through observation.

Athleticism was the most important physical consideration but he said there was a number of factors to consider. The racing world is not interested in X-Rays, but does scope 3 year olds. Tom felt that the sport horse breeders in the UK were really missing out by not selling their stock through auction. He said that the auction dictates the market value of a horse, but if you sell privately you are allowing one person to dictate that value.

He said that breeding was the first step in producing a successful horse for any discipline, and rearing and production gives them the extra chance to be successful.

After the speakers had finished, the audience had the chance to talk to the speakers and also do some very valuable networking with other breeders. It is the best way to find out how other breeders are finding the market, and what sort of breeding decisions they are planning for the year.