The 2019 running of the British Breeding Futurity series saw 41 Elite awards made across 13 venues that covered the length and breadth of the country. 20 Elites were in dressage, 9 to the show jumpers, 9 in the eventing section and 3 to ponies. For the first time in many years this included assessments for 4 and 5 year old young prospects who were hoping to qualify for the newly relaunched Equine Bridge.

The highest score of the whole of the 2019 Futurity series was once again to the dressage candidates. Lynne Crowden’s Woodlander Stud always features in the final awards and this year is no exception. The 4 year old mare FASHION earned the top score and was bred by Lynne out of the Blue Hors Zack daughter Zandra and sired by the homebred Freddie M, of course the full brother of Farouche. Now owned by Amanda Maine Ticker, the elegant leggy mare showed really elastic movement and effortless cadence and really deserved her incredible marks including a perfect 10 for frame. The dam line is as ever very interesting. Dam Zandra produced an Elite foal last year in Woodlander Desoto. Her grandmother is herself a granddaughter of Loretta, the dam of Diamond Hit and Sandro Hit among others. 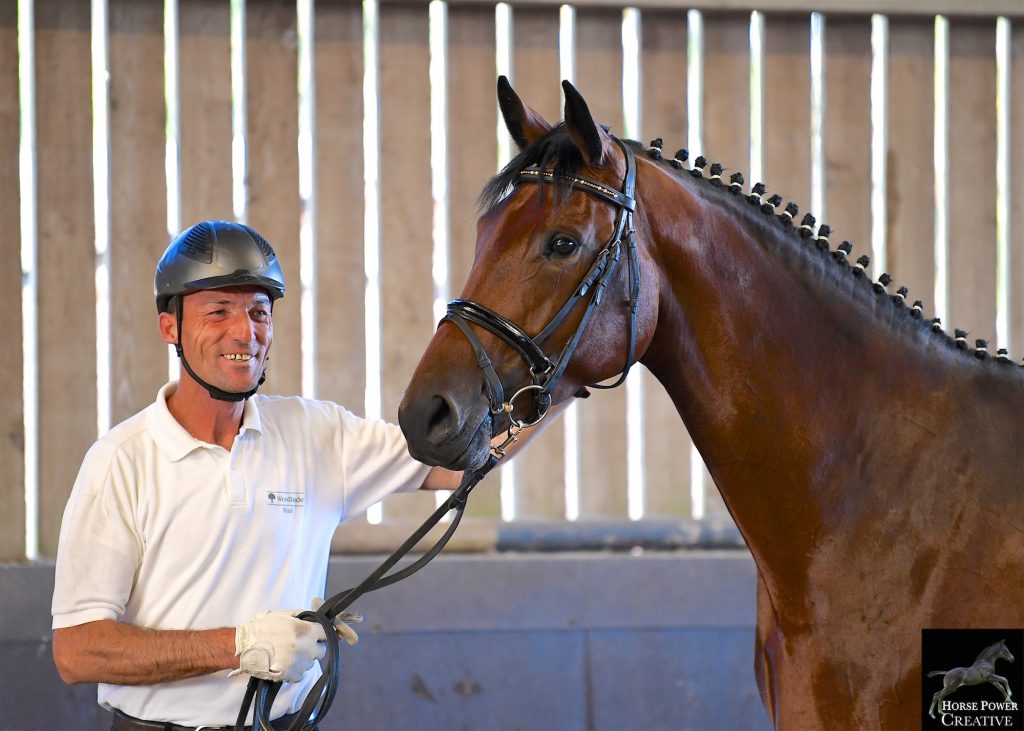 Lynne also bred the overall top 2 year old, the chestnut filly REGGATTA DE BLANC and the Woodlander team produced her on behalf of owner Zahra Sadry. The filly’s sire is the 5yo world champion and 6yo vice champion Revolution, a very tall stallion hailing from the Westphalian line of Rock Forever and further back to the Holstein jumping line of Ramiro Z. Revolution also sired the Elite colt foal Ravello at this year’s Futurity. Reggatta De Blanc is also a daughter of Zandra, an incredible record for the dam.

The high scoring foal of the whole series also came from the dressage ranks. This was Fiona O’Hara’s colt FINNEGAN. The June born son of German sire Foundation is an embryo transfer foal out of the Gribaldi mare America. America’s dam is a Hanoverian daughter of the jumping sire Raphael who was consistently bred to Trakehner stallions, presumably to add more refinement. Finnegan scored a truly impressive 9.75 for his trot and 9.5 for both canter and walk. 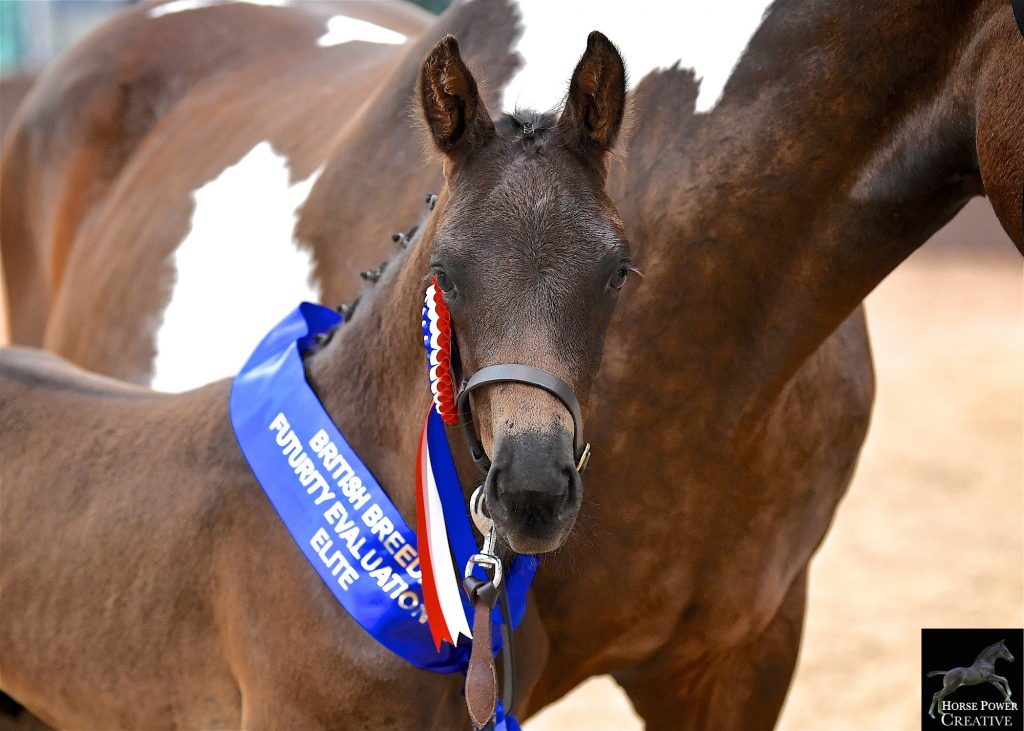 The high score overall among the 3 year olds was another dressage entrant, the Franklin son FINALE. Kathryn Marsh owns the British Hanoverian registered youngster who was bred by Gillian Jones out of her Show Star daughter Sennerin. Sennerin is the half sister to the licensed Westfalen stallion and small tour performer Bond (by Bravissimo) and the immediate mare family has produced the Warendorf State Stud stallion Floribot. Sire Franklin is line bred to Ferro , he was the 2013 KWPN Champion stallion and was a finalist at the Young Horse World Championships.

Although the dressage section yearling winner did not score an Elite, he is still an exciting prospect. Bred by Woodlander Stud, the Trakehner MILLION is line bred to the top stallion Millennium. He carries the blood of Millennium’s granddam Mazurka Magica on both the top and bottom of his pedigree. He was awarded an Elite as a foal with an incredible 9.75 for trot, and when presented as a yearling still scored a 9.5 for trot and overall received a Gold award. His dam was supreme champion at the Trakehners UK breed show. 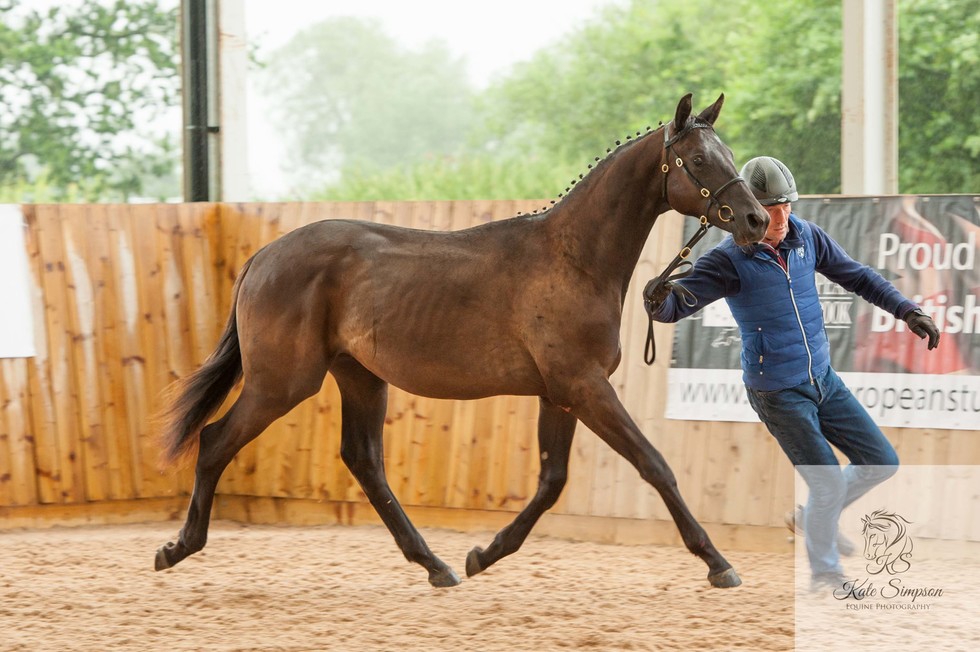 Catherston Stud had a fantastic Futurity in the eventing section with their resident stallion Timolin, siring two of the age group winners. All in all Timolin was the most successful sire of the 2019 series, producing 4 Elite and 9 Gold offspring. The yearling winner TIME TO FLY was also the champion eventing foal of 2018. This June born filly was bred by Sally Warner out of a mare by the stallion The Crofter. He was an Irish Draught stallion who is also sire of the popular ISH stallion Cos Me is Black.

The 2 year old section saw a tie between the colt OPPOSITION PIRATE and the filly CATHERSTON TARANTELLA. Tarantella is another daughter of Timolin. This very good looking feminine youngster is out of a Dornenkoenig daughter, who was a son of Donnerhall. Opposition Pirate is a son of the great Trakehner eventer Fleetwater Opposition, bred by Karin Molone and owned by Fleetwater Opposition’s owner John Johnston. As a stallion prospect he certainly looks good on paper as his dam Herah is a daughter of the top sire of eventers – Heraldik. 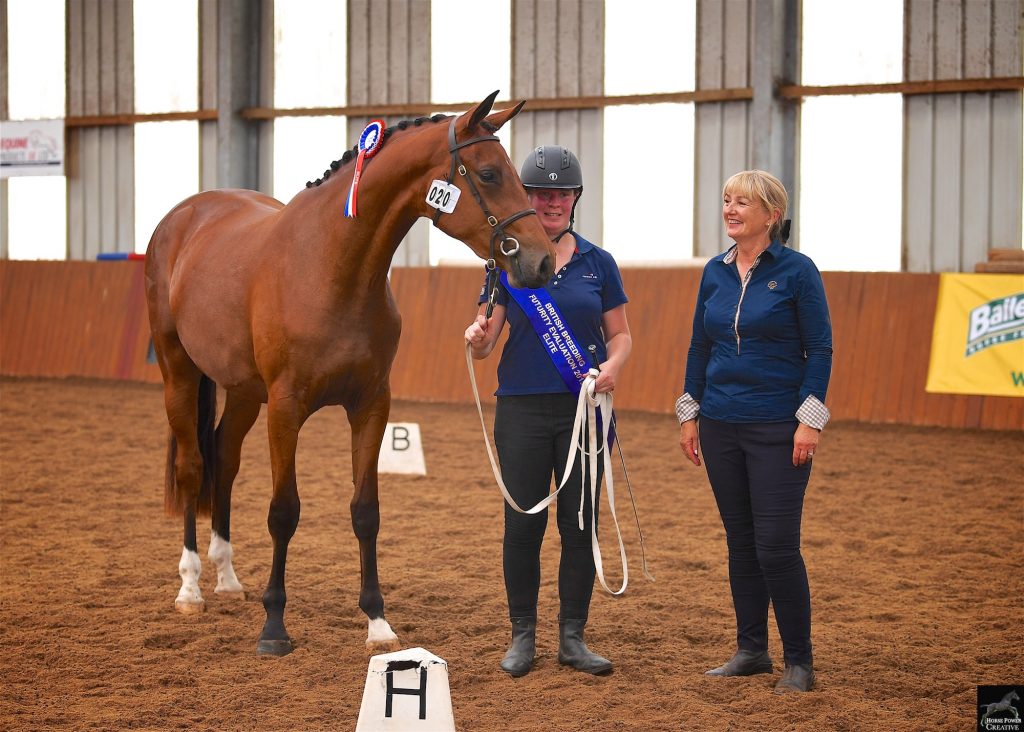 The 3yo champion was the Diamond Hit son DIAMONDS CAWEVER, owned and bred by Barbara Heaton Smith. When presented last year, Diamonds Cawever had been just .10 of a mark away form a Elite score. This year with scores of 9.5 for walk and trot and a very good attitude over fences, the Elite score of 9.03 was well deserved. His dam carries 75% thoroughbred blood.

The Show Jumping numbers presented to the Futurity remain disappointing. This is further reflected in the marking with the high scores in each age group being somewhat lower than other disciplines. Two foals shared honours both scoring a 9.2 to receive an Elite. Writtle College presented their own LORDSHIPS BEAR NECESSITIES to be the highest score in their region across all ages and disciplines. The chestnut son of young British bred sire Balou For Pleasure is out of a Dutch bred daughter of Now or Never M. The mare family is that of dressage sire UB40.

Equalling that score was Ashdale Sport Horses’s MR TUXARA, a Taloubet Z son who has sold for a very impressive £38,000 at the Bolesworth Elite Auction. His dam Ashdale Luzara was a consistent international 1.60m performer and is a daughter of Luidam. 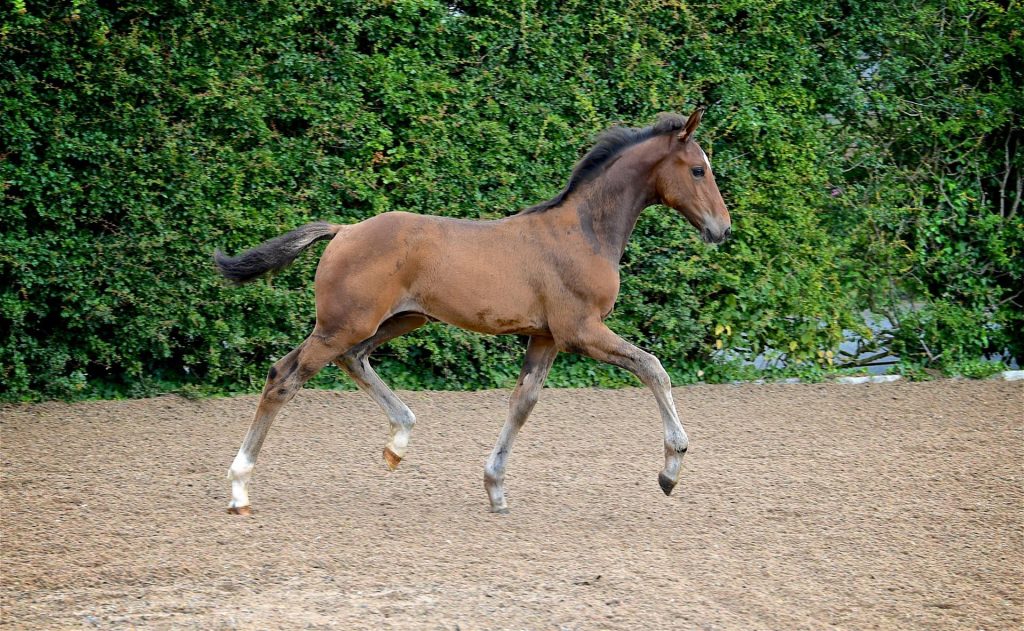 The top three year old came from the Catherston Stud round and was bred by Beth Morgan. This was the son of Sir Obolensky Z – MAVERICK XVIII. The damsire Limmerick has been a very influential sire in Ireland. Maverick scored a very impressive 9.75 for his jumping ability, with careful quick reflexes. The sire is a Westfalen bred son of Stakkato Gold who is currently jumping in young horse international classes with Christian Ahlmann. 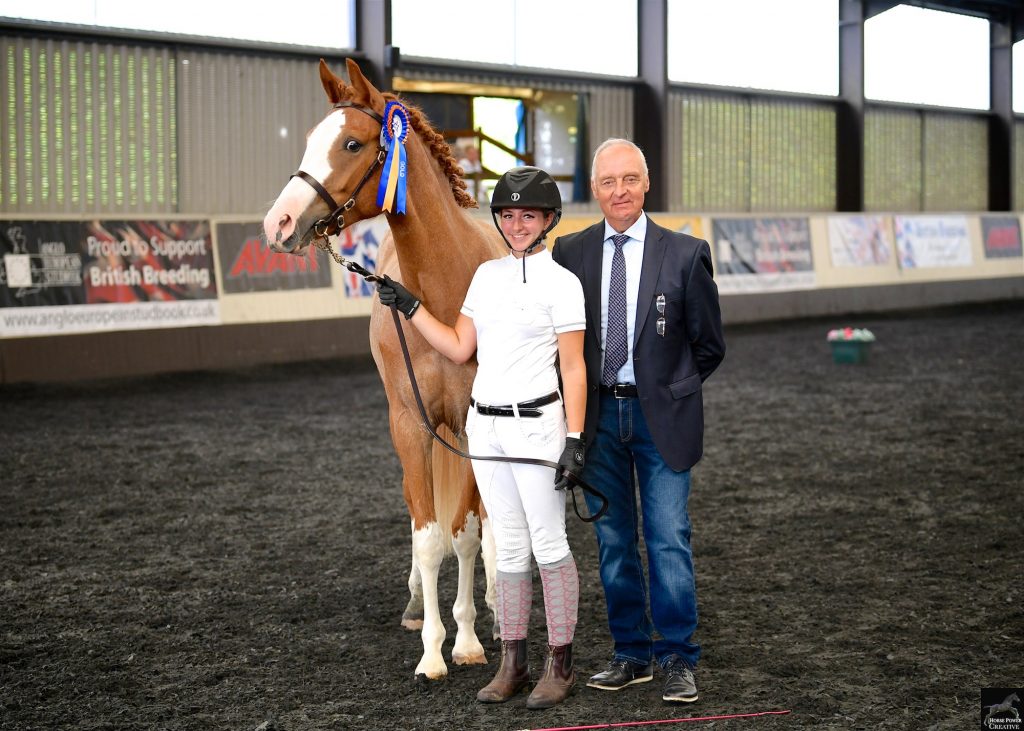 Finishing on the same score was the top yearling, N-DIODORO. As his name suggests this is a son of top sire Diarado. The dam’s half sister has produced the international jumper Bjorn H. N-Diodoro was bred by Jennifer Kovalevska.

Sadly no yearlings were presented in the endurance section and only 12 came forward across the discipline in total. The top score of all of these was Georgina Vaughan’s foal CD ELEKTRA who is out of proven multiple 160km winning endurance mare Vlacq Bronze Image. Sire Vlacq Zibaq has produced high scoring offspring at the Futurity in the past including last year’s Endurance foal champion.

There was one Elite foal among the sport ponies this year which was Diane Kilshaw’s filly HENZA SELENE. Diane had purchased her State Premium dam Sophie the previous year from Germany in foal to Dallmayr K. Selene rounded off an amazing season by also being named the champion sport pony foal at the Elite Foal Tour Final.  Sophie is also the dam of breeding stallion Numero Uno, who sired the Weser Ems licensing champion last year.

Just a fraction below an Elite score was the top yearling IMPERIAL HIGH NIGHT FIGHTER owned and bred by Trudy Goulding of End House Stud. This registered British Riding Pony colt is destined for a top flight eventing career and he impressed the judges with both his walk and scopey canter. His sire is the Welsh Section B stallion Rotherwood Signature.

The 2 year old section had only one entrant across the season which was the pure bred Connemara BARROWBY HORIZON who was awarded a Silver Medal. The 3 year old champion was the eventing prospect BATHLEYHILLS COLOUR CREATION. A son of the former Futurity Elite graduate Bathleyhills Monet, Colour Creation was approved by the SPSS earlier this year and was Reserve Champion of the Northern grading. His dam is a daughter of the German bred coloured sport pony stallion Acado.

The Futurity is still developing under the new team of Directors and there are still some aspects of the linear profiling that are not fulfilling their function. With each entrant’s linear profile available for public viewing, it can be confusing looking at the linear profile for some high scoring youngsters showing a significant number of variances from the ideal but still being awarded a very high mark, and other youngsters showing nearly all their linear scores within the ideal range but being awarded a much lower mark. This inconsistency has improved since 2018 but is still a factor that requires more development.