The UK is spoilt in the ranks of older retired show jumpers, none more so than stallions of the quality of BIG STAR.

Shown under saddle he clearly enjoyed his star status. What impressed me was his natural ability to sit and collect the canter, you could imagine him doing a very good canter pirouette. His competition achievements do not need repeating here and although his stud fee is high, he is a dual Olympic gold medallist and we are lucky to have him standing in the UK.  A 5 year old British bred son of Big Star that was presented was C STAR WW whose dam jumped at the young horse world championships at Lanaken and is now competing at 1.40m internationally and comes from a strong damline. A tall young stallion with an active hind leg he current lacks the balance to show himself to the full. 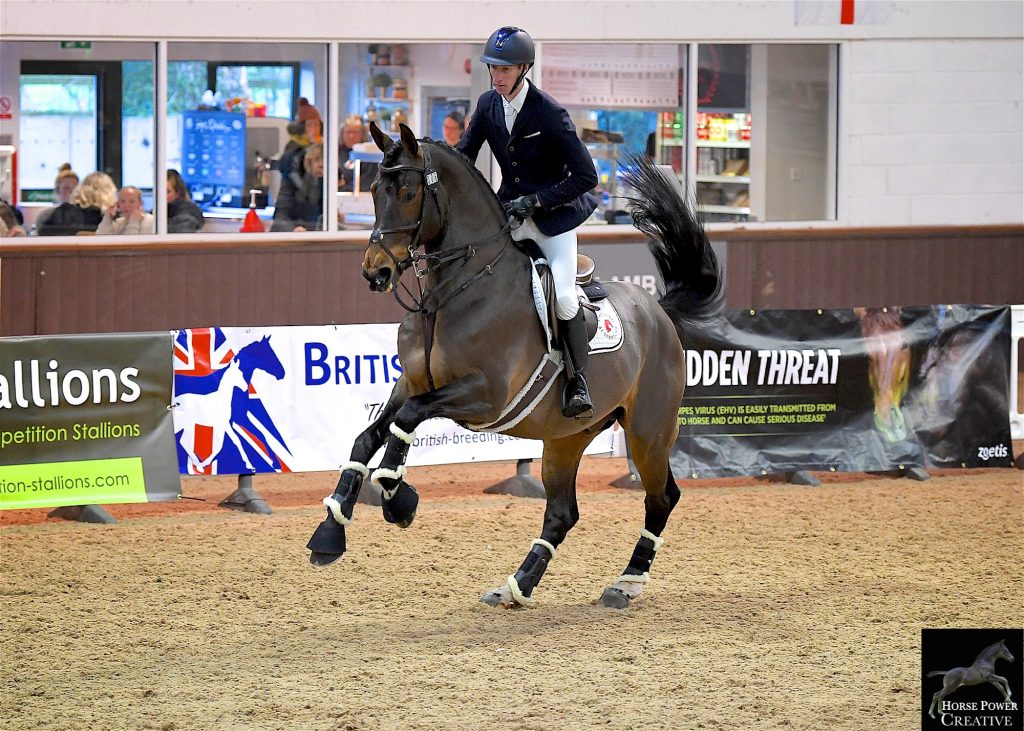 Stallions AI brought a number of retired Grand Prix stallions including WHIN WHIN a big framed horse standing over a lot of ground with a nice neck set and JE T’AIME FLAMENCO. The later had a tremendous international career with Billy Twomey who now competes his very talented son Kimba Flamenco. He has let down well and looked in good form for 20 and carries the blood of top French sire Le Tot de Semilly. 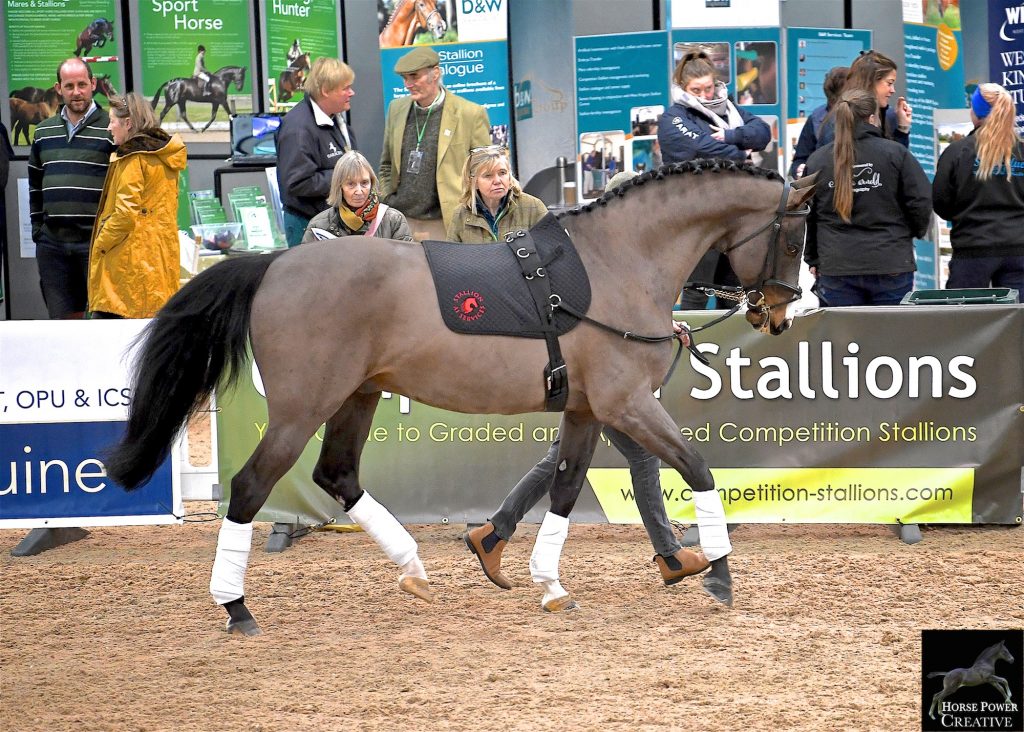 Another older stallion, still looking well and enjoying his jumping at 22 was RASPUTIN. Successful in young horse classes he then had a break to be ridden by his owner before coming back and jumping in 1.15 and 1.20m classes. 19 year old CRISTO was only shown in hand. A good looking Holstein son of Contender he is ranked 53rd in the WBFSH sire rankings. WALDO VAN DUNGEN was shown in hand and is being aimed at both the eventing and show jumping markets. ZIP PHIN looked a little older than his 16 years and could show more ability to shorten his frame. He is still actively competing in 1.30m classes.

Among the young horses presented was the 4 year old LION KING a son of Harley VDL who jumped internationally with Jessica Kurten. Lion King showed a good jumping technique and a canter with plenty of activity. The 6 year old KENSINGTON W is also by a VDL stallion, this time Zavall. He took a little while to settle in the arena and did not jump. ASHDALE LEGEND was another one who was spooking at the surroundings but jumped with ease and scope. He is already jumping in international young horses classes and is a son of the international star Luidam. 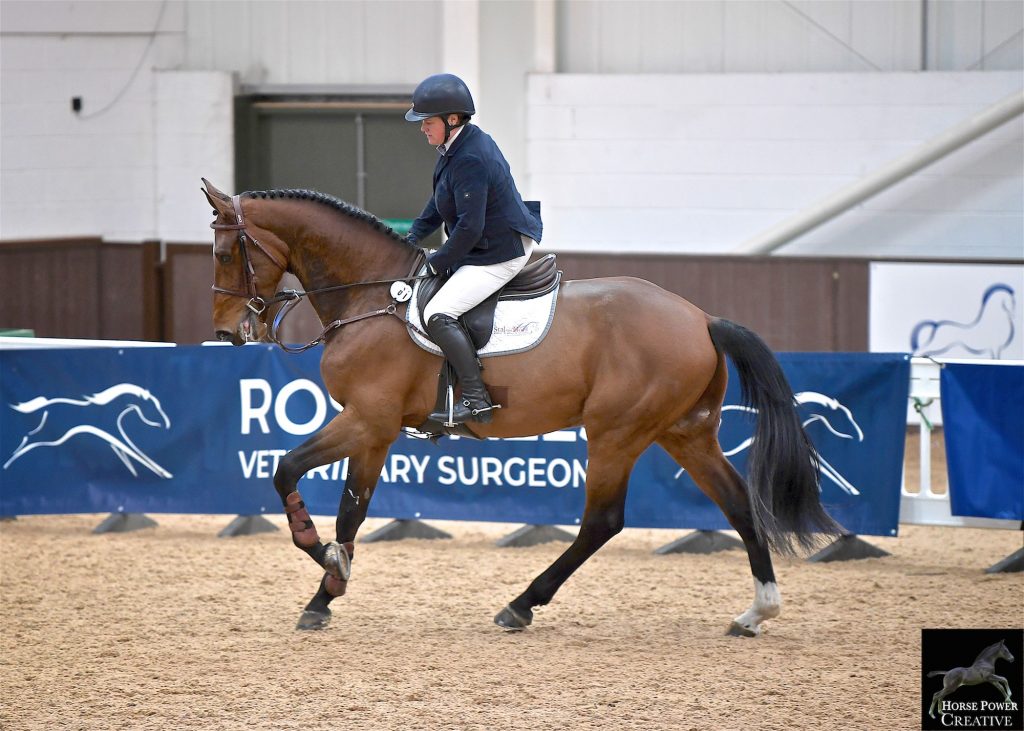 CORNETS PLEASURE WW combines the blood of Cornet Obolensky x For Pleasure x Nimmerdor. His dam is the full sister to Scott Brash’s Hello Forever. Still quite babyish he lacks the strength to find his balance yet. NPS SUPERNOVA is an 8 year old by Casall x Cathago. His commentary notes made no mention of any competition record but he is competing in Foxhunter and 1.30m classes. He was a big scopey framed horse who made a nice shape over the fences.

One of the young stallions that particularly caught the eye was KLARIS GIDDY-UP, produced and bred by Brendon Stud by the top Nations Cup and championships performer Don VHP Z out of their successful international mare Sussex Caretino. He showed plenty of scope and a lovely technique in front and is a lovely elegant modern stamp. 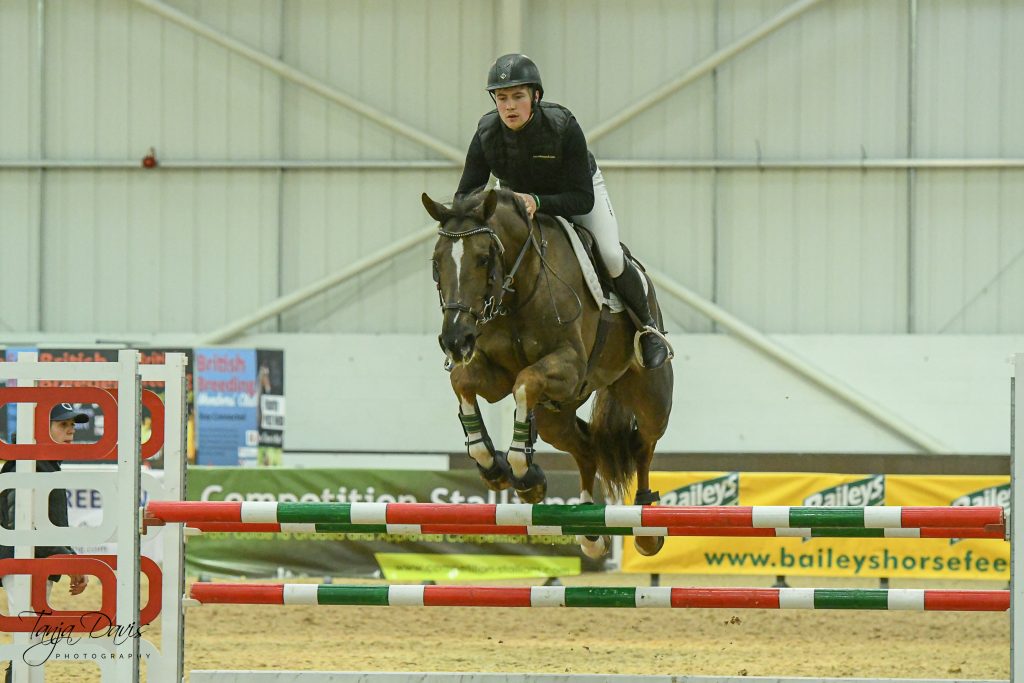 Also in the category of one to watch was the 7 year old COMFORT, who came over from Germany at the start of last year. I liked him in the stable as he has a harmonious frame and a very nice attitude. Under saddle he had a lovely rhythmic canter and plenty of scope. A son of Christian who has also recently moved to the UK with a top motherline (Lord Pezi, Cordalme Z, Royal Z etc). 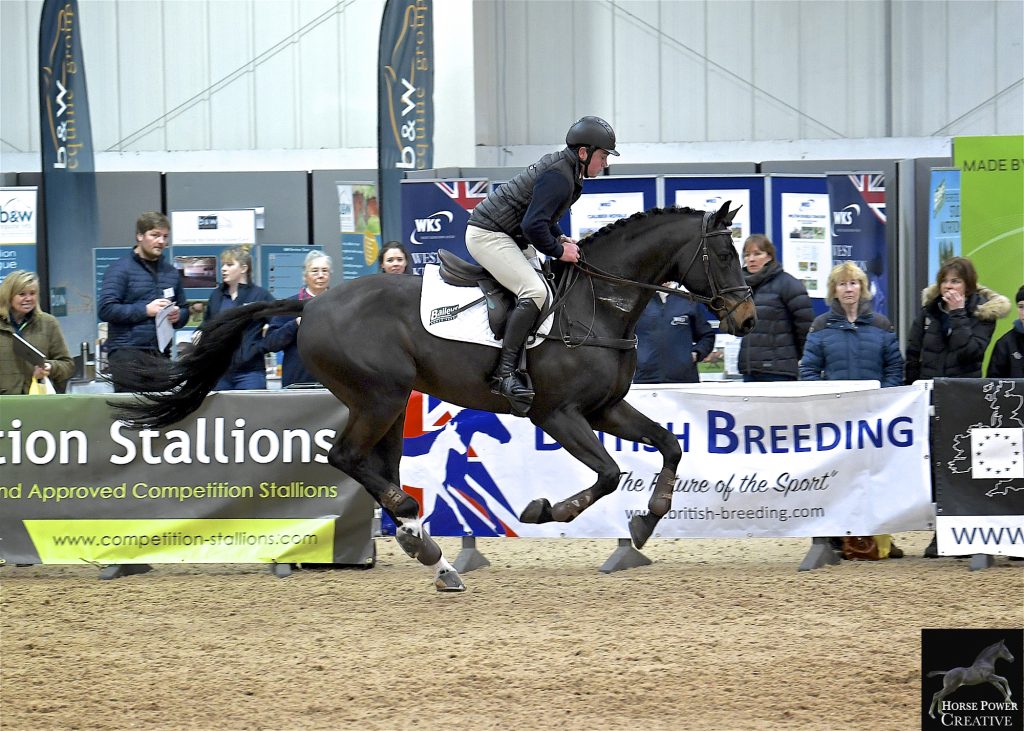 A stallion previously produced by Brendon Stud was EL THUDER, a stallion that looks very ridable with good use of the shoulder on the flat and over fences. Brendon Stud still stand two further stallions that where shown at Addington. PANDITO MERELSNEST Z looked well established for 5 with a well balanced canter and good scope. He is a son of the prolific Plot Blue. The 22 year old CARETINO GLORY demonstrated his great ridability with a very young jockey. A very fluent mover who uses his shoulder well he has sired successful offspring in all disciplines.

Robert Whitaker brought two young stallions – CAVASO Z and VERMENTO. The former is very stamped by his damsire Darco and was quite green but demonstrated powerful and quick reactions. Vermento is a scopier stamp then his sire Argento, a consistent Grand Prix performer for John Whitaker. He looks to have a huge amount of scope and is a very interesting young prospect. 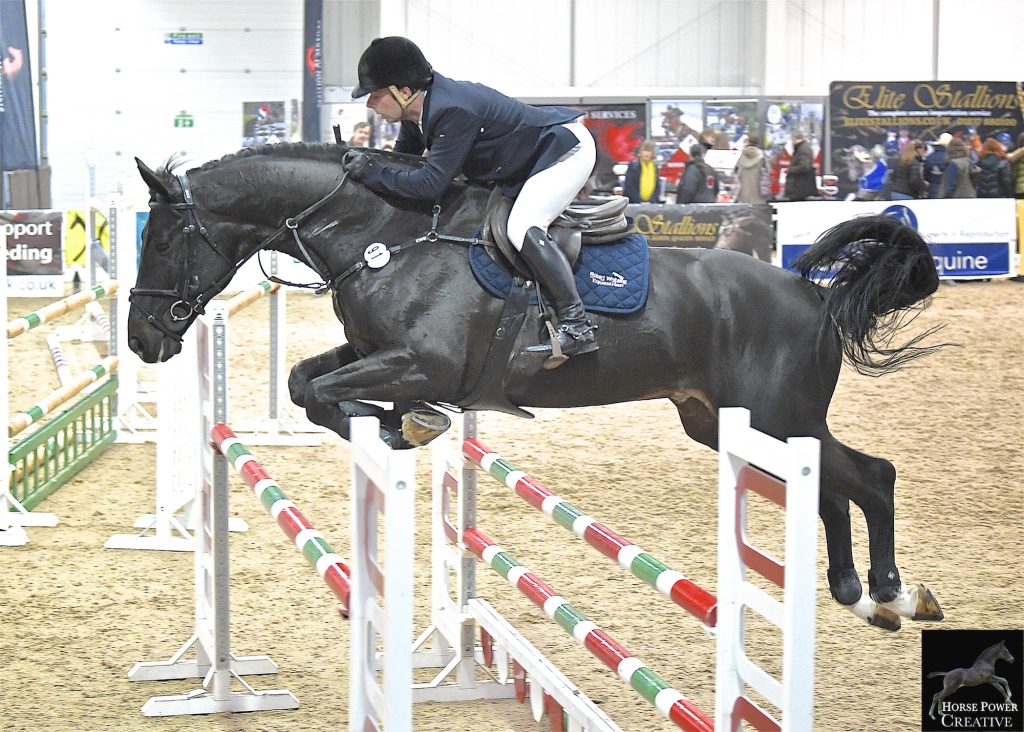 KL KING OF JAZZ combines Irish Draught jumping lines onto a dressage bred dam. He looked light in the hand with a lot of knee action and a powerful walk. KANTAIRO WW looked very genuine and careful. He is a 6 year old son of leading sire Kannan. HOCUS POCUS cant help but catch the eye with his flashy colouring. He was clever and put himself right when needed which can also be said for JONAGOLD who was very honest and careful behind. 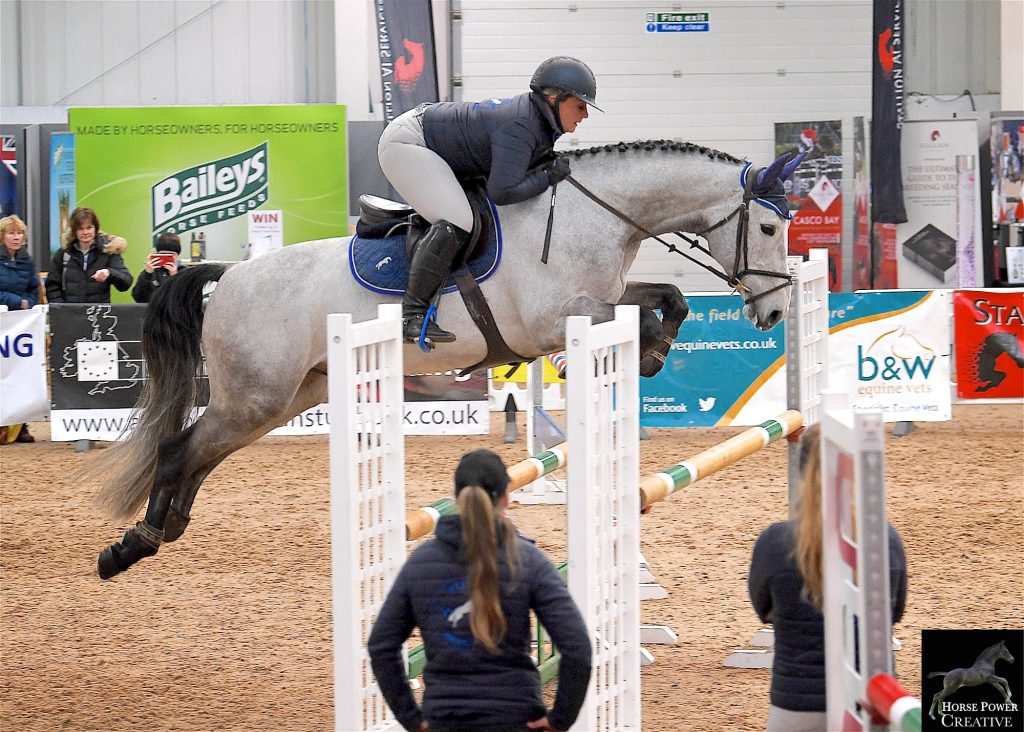 The only coloured stallion in the jumping section was the son of John Whitaker’s old ride Utah van Erpekom HAZELWOOD UTAH’S ROMEO. The 6 year old jumped very pleasantly and showed a nice neat hind leg technique. EDOBANTOS won the award for the display with the best crowd interaction which showcased the stallions great temperament. He has competed BD and BE before focusing on show jumping.

Barrowby Connemaras presented a number of stallions for the pony market including the black KIPPURE LANCELOT, and it was nice to see him jumping in a snaffle with no martingale with a young rider. The buckskin KILLOUR STAR has a strongly defined performance pedigree and was neat and typey with a well set on neck.

As in the eventing section there is a good selection of blood lines, ability and performance records for British breeders to choose from. The whole day was a very useful exercise for British breeders offering plenty of food for thought with some young stallions on my personal shortlist as ones to watch.