The National young horse classes in any discipline, are always a good indication of the strength of that country’s future talent. In dressage, there are always some horses that are not competed until they are older and more established but even so, the young horse classes are still fascinating to watch and can be a source of some incredible talent (think Valegro).

At the British Dressage National Championships there are classes for 4, 5 and 6 year olds. 10 horses in each age group qualify during the year and ride an age appropriate individual test on the Saturday of the Nationals. The top 4 then go forward to the Sunday where they are assessed as a group and then ridden by a guest judge.

As a breeder I like to watch these classes to see if there are any British bred stock competing and also to assess which stallion’s offspring are catching my eye. In 2017 there were 4 British bred 4 year olds, 6 x 5 year olds, and 4 x 6 year olds. Only 2 of these were sired by a British based stallion, which were the very neat 4 year old Waverley Dante (by Dimaggio) and Michael Eliberg’s 5 year old Watusi (by Wavavoom).

Annoyingly British Dressage do not print the breeder’s name anywhere in the show programme, but at least the sire, dam sire and country of birth is listed (with the odd mistake).

There were 2 British bred entries that made the final 4, and went through to be assessed on Sunday by Dr Ulf Moller and Maria Colliander and ridden by Eva Moller. These were Waverley Dante, bred by Sara Longworth of the very local Waverley Stud and Intergalactic Aimbry, who was purchased as a foal by Julie Lockley, who later bought his dam. Sadly the name of his actual breeder is not listed and so they cannot be credited here.

Waverley Dante is a son of the late and prolific sire Dimaggio, who had more offspring competing at the Nationals than any other stallion. His damsire Furst Heinrich has produced a dynasty of stallion sons and grandsons (Furstenball, Finest, Furst Romancier etc). Rider Greg Sims had bought Dante as a foal and although he was not as initially striking as some of the others in the class, he was so well balanced and had such a lovely brain, the quality of his work shone, especially under judge Eva Moller. I liked the very active hind leg in the canter that will make tempi changes an easy job in the future. Although he was 0.4 of a mark behind after the first day, the crowd were in agreement when the judges called him forward on Sunday to take the title. 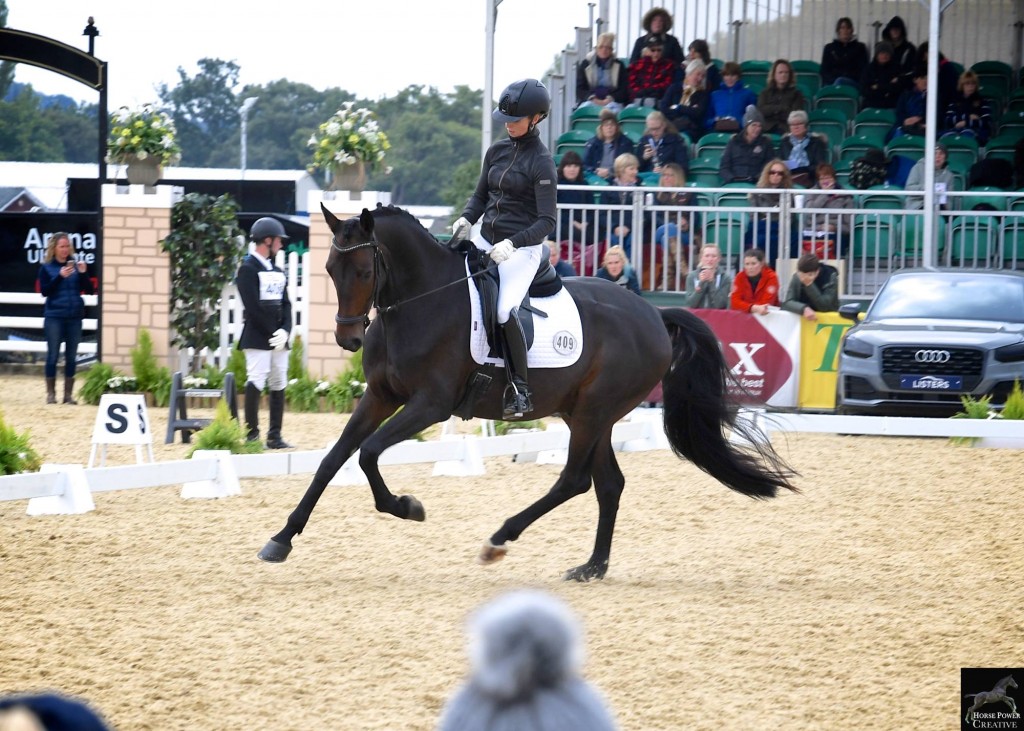 The Reserve Champion is a stallion, so still of interest to British breeders. This was Izonik, a huge Dutch bred son of Edward Gal’s ride Glocks Zonik out of a Jazz mare. Izonik had competed in the PAVO Cup semi finals in Holland earlier in the Summer and showed a very good attitude for a young stallion. At times he lost a bit of self carriage and the contact was not always constant, but he certainly filled the eye and had a very scopey walk.

In third place was the German bred mare Furstin Totilas, who has been purchased by the Mount St John team as a valuable addition to their breeding program. By the Grading Champion For Romance (a Furst Romancier son of the incredible mare Gesina) her dam is none other than Lominka, who is also the dam of the multiple gold medal wining stallion Totilas. She was a very well made and developed mare, who also had a canter that looks made for tempi changes. At times the activity in the hind leg pushed her onto her forehand, but the overall picture was very nice. How exciting that her future foals will all carry a Bred in Britain sticker.

In 4th place was the British bred Intergalatic Aimbry. The compact chestnut had a strong frame and although was active and forward going, he struggled with his balance in comparison to the other three. There was also a little tension at times. What is interesting is that his sire Rousseau does have a little bit of a reputation for offspring that struggle with the canter as a young horse, until their strength is better developed. His dam sire is Emma Hindle’s Grand Prix ride Lancet. 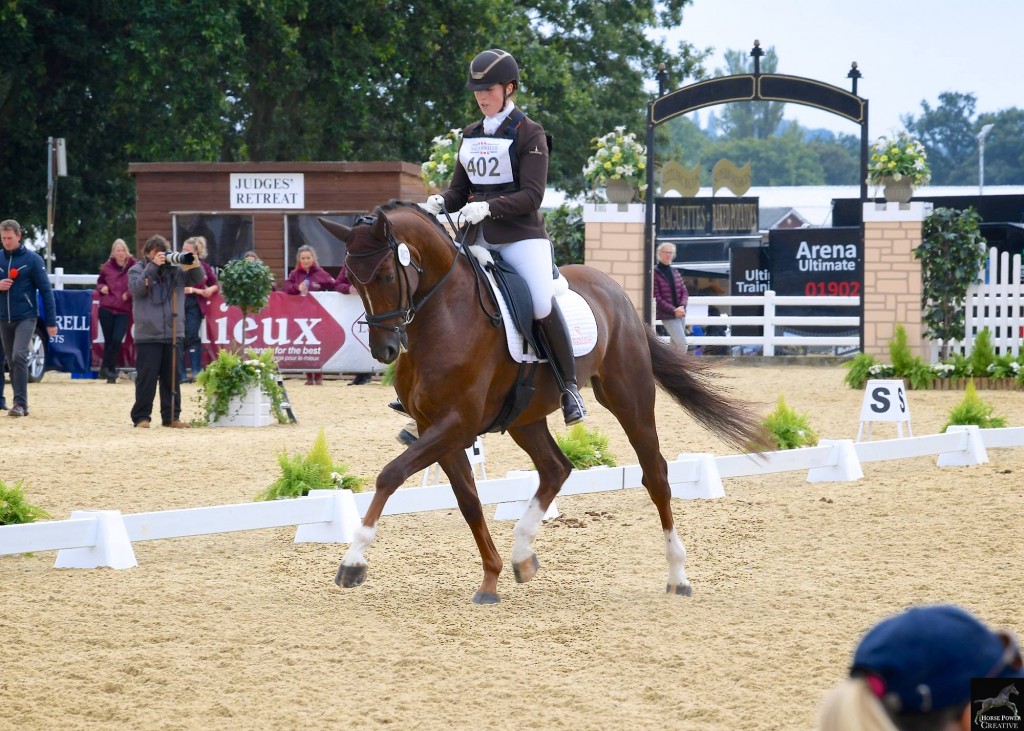 This class was the strongest in terms of British representation and one that sadly didn’t make it through to Sunday’s final judging was the lovely His Highness, National Novice Champion earlier in the week but a little tired by time the young horse classes started. So it fell to the British Hanoverian mare Hawtins San Floriana and the Oppenheimer’s home bred mare Headmore Bella Ruby to fly the flag for Britain on the final day.

When Charlotte Dujardin and Carl Hester start buying young British bred horses, you know as an industry things are starting to improve, and when Charlotte and Hawtins San Floriana were awarded the 5 year old title it cemented a super day for British breeding, San Floriana is a daughter of the Sandro Hit son San Amour out of the Elite mare Floriana. Floriana represented Great Britain at the World Young Horse Championship in Verden and is now competing at Small Tour. San Floriana was the 4 year old champion last year and looks set for an incredible career with Charlotte.  She caught the eye as soon as she entered the arena with her wonderful front and big walk. She is possibly a little flat across the croup but has the most super reactions and is a mare anyone would love to have in their breeding program. 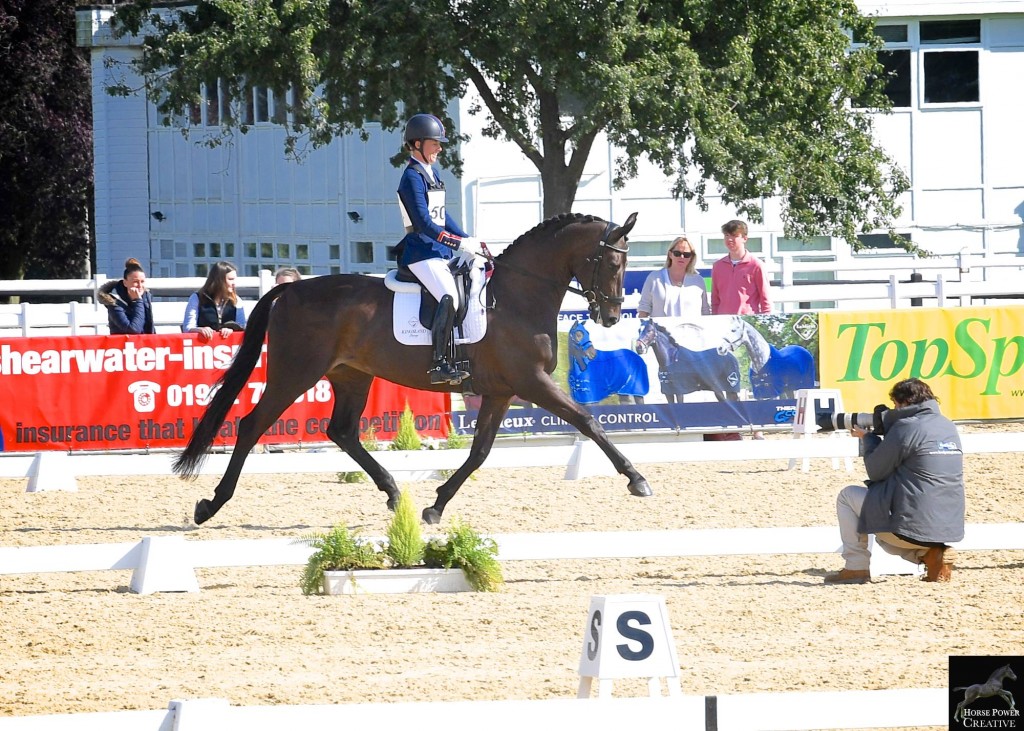 Reserve Champion was another mare purchased as a foal in Germany by Emma Blundell of Mount St John – Zonetta. Like the 4yo Reserve Champion she is a daughter of Glock’s Zonik. Her granddam is the late Loretta, best known as the dam of Sandro Hit, Diamond Hit and Welt Hit. Occasional tightness in the back lead to a little resistance in the contact with Eva Moller asked her for more expression, but overall she really lived up to the potential in her bloodlines.

In eventual third place was the mare who had led after day one – Helga. Helga was purchased at the Brightwells Auction in 2016. She was a little soft over the loin and found the collected work a little harder. However she had a lovely rhythm in the trot work and was a very attractive type. Her sire is the KWPN stallion Chagall who combines the top Grand Prix blood of Jazz and De Niro. Her dam is by the Premium stallion Samba Hit II.

In 4th place was the very ridable looking mare Headmore Bella Ruby. This Bellissimo daughter had three half-siblings competing at this year’s Nationals, all bred by Sarah Oppenheimer. She has a harmonious frame and is light on her feet with good rhythm.  She made a very nice picture under the Eva Moller and as she develops more driving power in the hind leg will be a very interesting young horse to follow.

It looked as though British bred horses might achieve a clean sweep of the Shearwater Finals, when the lovely black mare Hawtins Duchessa headed the first day with a score of 8. She had impressed me with her natural cadence, and very natural looking movement. Her rider Bryony Goodwin also impressed with her super hands, that really allowed the mare to move through her whole body.

However under test rider Eva Moller, Duchessa went a little green at times and found the canter demi pirouettes a little difficult. Eva commented that she found her a little slow to come back to her in collection as the trot was so big. The Decamerone x Don Frederico daughter ended up in 3rd place overall. 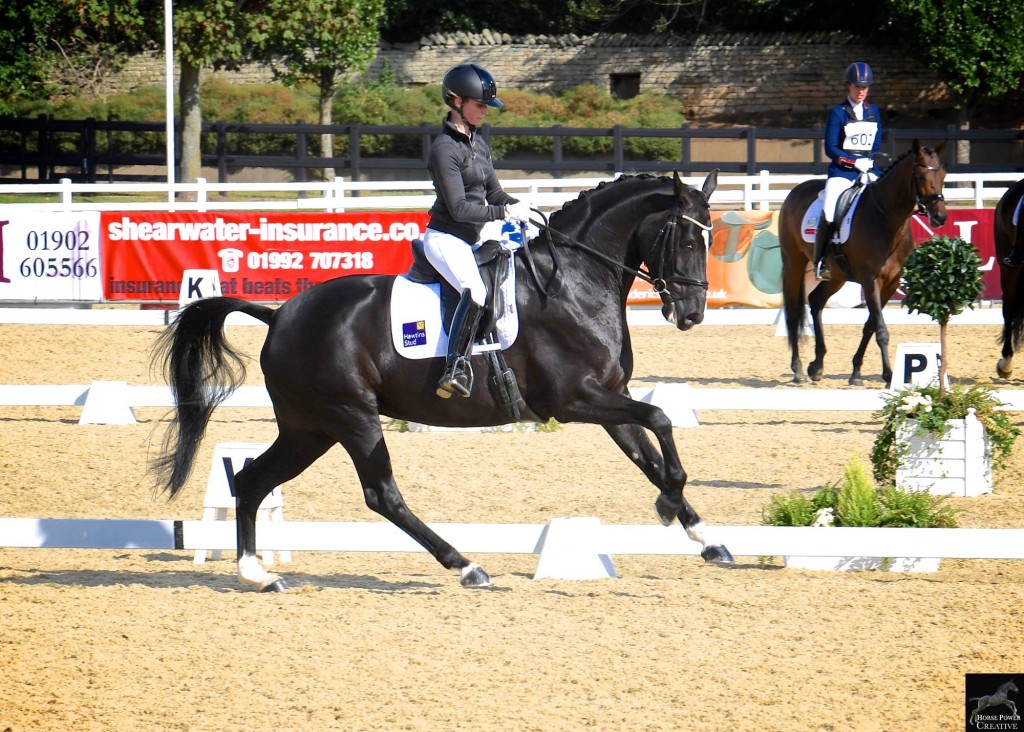 So that meant British hopes lay with Tantoni Dallagio, a bigger stronger stamp than the others, by Danone II (the full brother to Danone I who sired European medalist Dante Weltino). He really improved under the test rider, becoming more uphill and showing greater expression in front. There was still the odd balance issue but he stayed uphill at all times. Eva commented that he stayed straight and correct on both reins and was willing to please the rider. This performance moved him up to 2nd place, building on his 2016 National Prelim title. 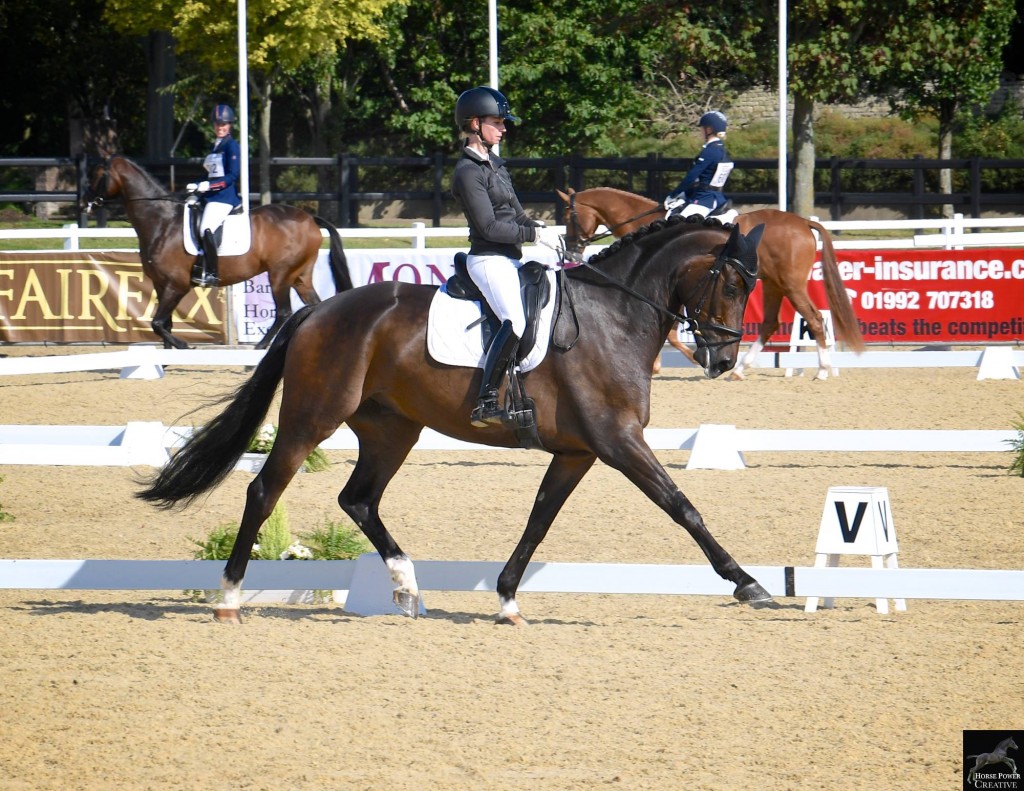 His dam Fortunie is by the Grand Prix producing sire Rubin Royal, who will feature heavily in our report on the rest of the Nationals, and is from a top Oldenburg motherline.

Almost inevitably it was Charlotte Dujardin who took the 6 year old title, not on her own little powerhorse Gio who was ridden by Sadie Smith in the final, but on Mount St John VIP. The judges took a long time to deliberate over the result but in the end awarded the title to Emma Blundell’s Vivaldi daughter. VIP took the Novice and Elementary titles in 2016 and was already the Medium champion in 2017. She showed a good jump to the canter with a well placed hind leg, and always looked good in the contact. She really relaxed beautifully and obviously gave Eva Moller a good feel.

Although it was a shame not to have British bred winners in all 3 Finals, the quality of every one that came through was inspiring and exciting. I left the Nationals with a sense that British Breeding is keeping up with the level of success our international riders are having. The dream of seeing a British team mounted on British bred horses is another step closer.