After a year missed due to Covid it was nice to celebrate the start of the breeding season with the traditional stallion event that is now run by the team from Breeding British. With the closure of Addington Manor, the event moved to a new location at Arena UK in Lincolnshire. Sadly numbers were down both in terms of stallions forward (mainly in the dressage section) and spectators. However if anyone missed it you can catch up via ClipMyHorse who livestreamed the event.

As in previous years many stallion owners dont make enough use of their 5 minute slot. Mare owners dont want to see experienced eventers and show jumpers popping an 80cm warm up fence time and again. The warm up should be done in the collecting ring, and in the arena itself the stallion needs to come in and show his scope and technique over a fence in addition to his paces. The commentary should include details on what positive attributes he is passing on and what stamp of mares he would suit the most. The event still needs more energy and impact. For example a horse walking or trotting into the ring in silence is dull – turn the volume up as they come in to make that important first impression, then commentary and then again some decent music as they finish off. The whole day needs to be interesting, informative and exciting, otherwise numbers of entrants and spectators will continue to drop and this is the best showcase we have for stallions based across the UK across the disciplines.

Starting with the eventers there was a nice mixture forward of Thoroughbreds, ponies, some SJ bred and some with more traditional eventing breeding. Among the Thoroughbreds Jamhoori caught the eye as a stallion who raced for many seasons but showed himself favourably under saddle. A strong hindquarter and deep chest made a pleasing picture and he had an active ground covering canter. Jamhoori ran 52 times and is a son of two time German Champion Tiger Hill. 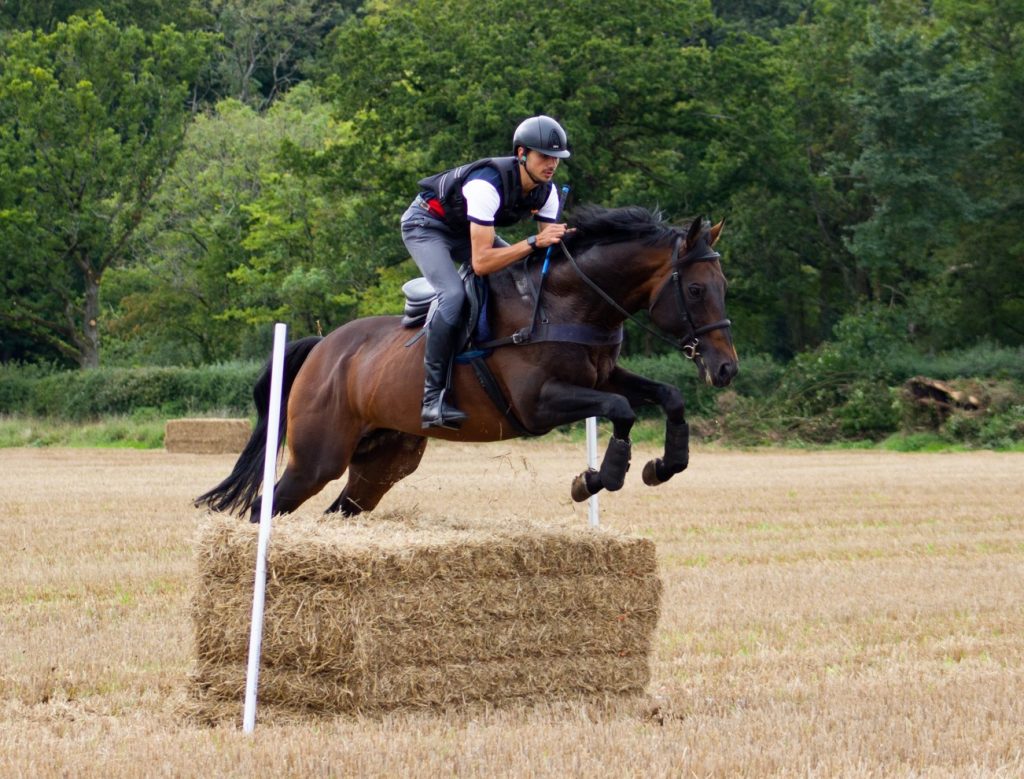 Future Sport Horses brought three eventers to the event. Future Hepsilon (Upsilon x Heraldik xx) is probably the largest framed of the three and offers a good option for blood mares needing a stronger frame. His sire Upsilon was looking to be a very exciting international eventer when illness cut his competition career short but is making a serious mark in the breeding shed. He is already the leading sire of young event horses in France. He brings the blood of Grand Prix jumper Canturo. Damsire Heraldik is a legend in eventing breeding having topped the WBFSH rankings on 5 occasions and adds vital Thoroughbred blood close up. Future Hepsilon showed a good fore leg technique over the fences. Future Gravitas (Grafenstolz TSF x Bohemond xx) wasn’t shown over fences as he is now pursuing a dressage career at Advanced Medium, recently picked up with Winter regional qualification at that level. He had previously evented to CCI-S** level and is very much targeted to that market being a son of the Elite Trakehner stallion and 6yo World Eventing Champion Grafenstolz. He is also the half brother to Olympic Silver Medallist Winsome Adante.

My favourite of the three was the grey Future Guilty Pleasure (Levisonn x Cantoblanco). Now 6, he hails from the same damline as Future Gravitas. He is consistently the leading sire of eventing offspring at the BB Futurity. An elegant stallion who is light on his feet and naturally balanced, he was careful over his fences. It will be interesting to see him out eventing. His sire Levisonn is a Holstein bred stallion who competed up to 1.40m level and was winner of his performance test. 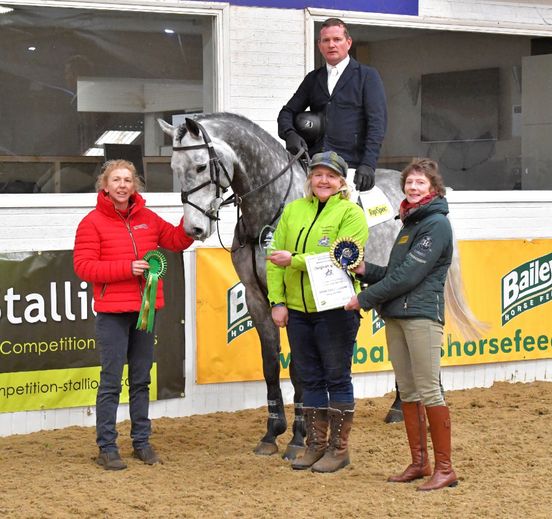 Also triple represented at the event was Catherston Stud. In the eventing section they had the homebred Catherston Oakley (Opposition Bombshell x Dutch Gold) and resident stallion Tiger Attack. Oakley is now 8 and will be making his Intermediate BE debut this year. He finished 2021 with a top 20 finish at CCI-S** Bicton and also won at Bovington and Bricky with a further 5 top 5 finishes during the season. He produced his first crop of foals in 2021 and seems to be passing on a good frame and walk.

Caunton Manor Stud are investing in some serious stallion power and have a rider to match in Olympian Oliver Townsend. Their 5 year old Jacondrik is very interesting from a pedigree point of view combining Olympic show jumper and WBFSH No 1 eventing sire Jaguar Mail with damsire Contendro I (current WBFSH No 5 and 5 times No 1) and the legendary Heraldik in the next generation. Jacondrik is a very active mover, nice and loose through the body with a compact frame. It will be interesting to watch how his eventing career progresses under one of the best riders in the world. 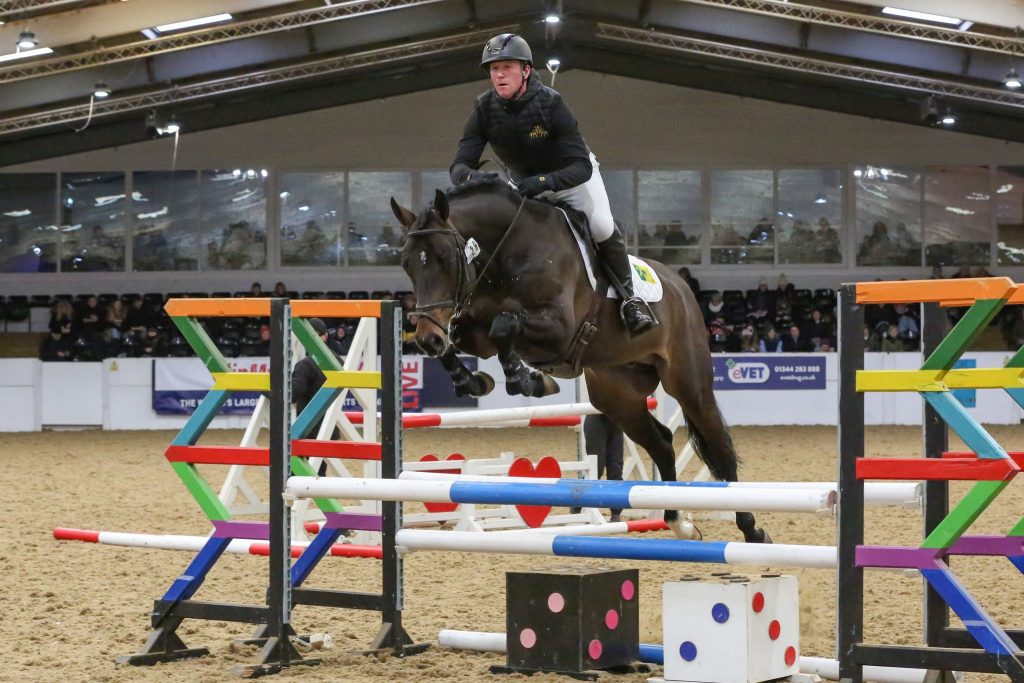 Ashway Laurenzo (Lauriston x Ircolando) has a show jumping orientated pedigree but is eventing at novice level with a 2nd place at his first CCI-S** in 2021. His sire Lauriston was an international Grand Prix jumper and Laurenzo certainly has a nice technique over his fences. He is compact, only 16hh and had a nice nice temperament in the stable.

One of the most interesting pony stallions forward was Lucinda Frederick’s Britannia’s Bijou (Littledale Bright Star x Mr Big Cat xx). Although he stands 154cms, he carries a lot of pony characteristics and type, courtesy of his very versatile sire. Britannia’s Bijou is a grandson of the triple 5 star winner Headley Britannia and has inherited all of her considerable scope. He has a really good athletic canter and walk and although only rising 5 jumped some good size fences with a really nice technique. He was one of the most impressive forward in the eventing section. 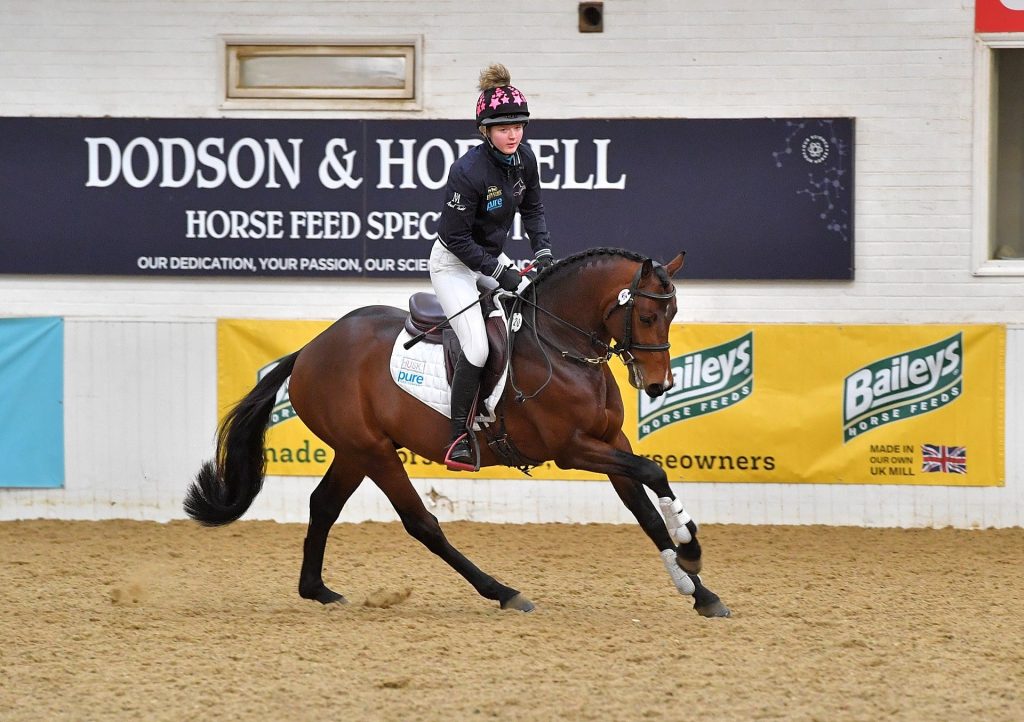 The Frederick’s team also brought the experienced Britannia’s Mail, a direct son of Headley Britannia by the previously mentioned World No 1 Jaguar Mail. This horse has never been the flashiest but is absolutely consistent and ridable and has shown he is an excellent competition horse – now acting as an advanced school master for Lucinda’s daughter. I think he would be interesting on a sharper blood type of mare as his pedigree is undoubtedly blue blooded as far as event breeding goes.

Abbeywoods Stud presented two homebred coloured sport pony stallions. The older of the two Abbeywoods Under Pressure is a strong bodied type, probably due to his traditional damsire Commanche Ace. The damline further back combines Hanoverian and Trakehner blood. Sire Murrybrook Moriarty is a part bred arab mainly siring winners in the show ring with some starting to come through in dressage.  A year younger Abbeywoods Veyron is out of the same dam and by Murrybrook Moriarty’s sire Royal Command of Wentward. He is a slightly finer type and showed a nice scopey jump and looked very straight forward.

Representing the native ponies was Connemara Hearnesbrook New Moon (Hearnesbrook Halley x Thunderbolt). He has previously evented to BE 100 level and jumped some small fences in his display. He has been successful in M&M WHP classes at the highest level and not only would be interesting for pony breeders but also breeders looking to create that classic TB and Connemara combination for a nice all-rounder.

Another stallion who started in the show ring before moving on to eventing and now a dressage career is Tiger Attack (Dolphin Supreme x The Outlaw). Standing at Catherston Stud he was a 3 times HOYS finalist in the prestigious Cuddy in hand championship and is siring championship stock in the show ring.  He passes on his depth and strong topline. As well as demonstrating his lateral work, and flying changes, he was very enthusiastic when shown over the fences too. With his high percentage of blood in his pedigree he would be interesting on a jumping bred mare to breed for eventing but with an eye on the show ring before hand. 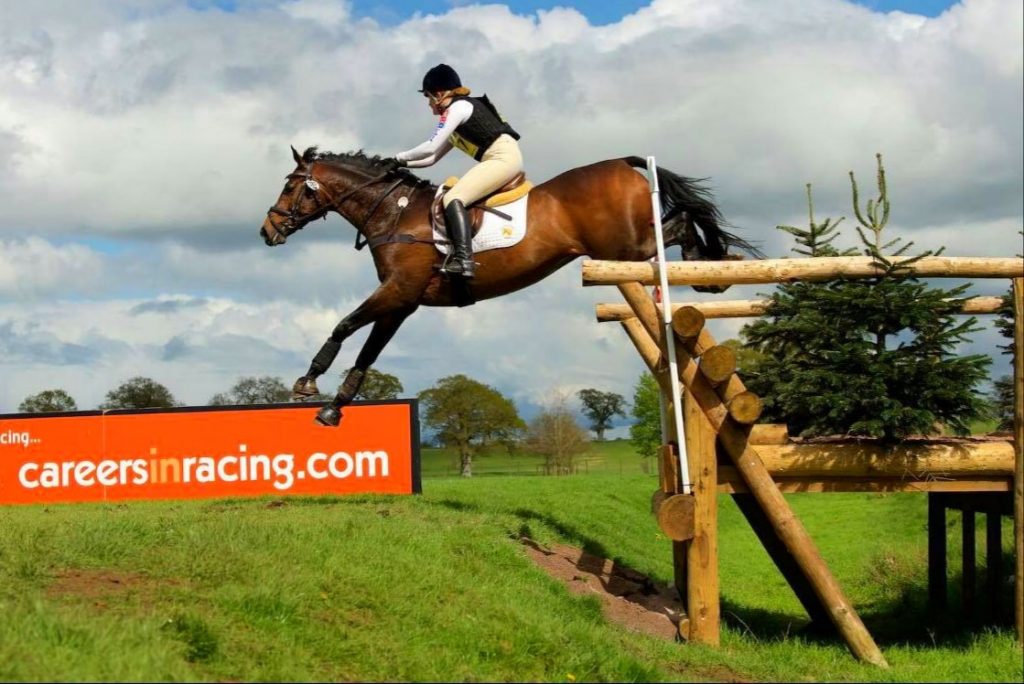 Leprince des Bois (Yarlands Summer Song x Quandy du Mayne) was the last stallion to be presented in this section. Now 23 this ex international 5 star eventer was shown under saddle and still retains plenty of enthusiasm for the job. An angular athletic stamp he already has offspring doing well in young horse classes in France. His sire was also an international eventer and is then sired by the Young Rider European medallist and leading sire Fleetwater Opposition, so a sire line packed in performance and soundness.