The opportunity to find a future National Champion, born and bred on British soil, is better than ever. For both professional and amateur riders alike, the 2016 NAF Five Star Winter Dressage Championships, demonstrated that British is often best.

Below is a list of all the British bred horses that won or were placed at the Championships. 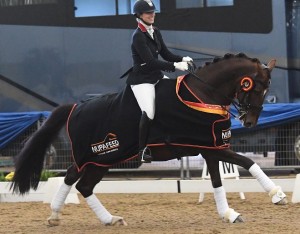 The PSG champion was a previous ride of Charlotte Dujardin and is now competing with great success with teenager Becky Edwards. His sire Dimaggio was quite possibly the greatest dressage sire to stand in the UK, and his tally of National Championship winning offspring will probably never be matched. We are very lucky to have a number of stallion sons still actively standing, including Diaggo who stands at Dimaggio’s former home in Sussex and Grand Prix performer Treliver Decanter..

Don Archie’s motherline has produced a number of licensed stallions and combines Holstein blood of Landgraf with the Thoroughbred blood of Sudan.

Rider Hannah Biggs bought this Scottish bred horse unseen from his breeder as a foal. The pair were Medium Open Freestyle Champions at this event in 2014. They were also third in the Charles Owen Advanced Medium Open. Don Schufro was an Olympic team medallist, who is famous for passing on his ridability and great canter. 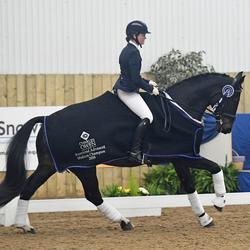 Rubin Star N stands at Romanno Stud in Scotland and has produced champion show horses, graded stallions and eventers, in addition to National Dressage Champions. The dam sire Demonstrator was one of the best Hanoverian stallions to stand in the UK, and was a Grand Prix performer himself. He also produced offspring who excelled in a variety of disciplines, and is an excellent broodmare sire.

Washington was no stranger to Hartpury having won the Area Festival Novice Open Championship in 2014. He is sired by the sadly now deceased Weltmeyer son Walentino.

This victory was a fifth National title for the combination of River Rise Escarla and rider Sadie Smith, who are also on the World Class Equine Pathway. Escarla hails from the motherline of the very exciting young Schockemohle stallion Grey Flanell. Her sire Lord Leatherdale is a Westphalian bred stallion from the Landino/Lanciano sire line, who has proved a great success in Dutch breeding. Lord Leatherdale has been used very successfully on mares by Negro, who is a son of Escarla’s dam sire Ferro.

This Scottish bred horse is a son of another Scottish bred mare. His dam Pussycat now belongs to Caledonia Sport Horses who themselves bred a champion at this show. She hails from the motherline of the Grand Prix horse Weltall.  Morayfirth Stud have bred a number of Regional and National dressage championships over recent years.

The sire French Kiss was a Bundeschampion who carried the combination of Florestan and Donnerhall blood.

Buddy Holly has been owned and ridden by Laura Wollen for just over a year. Sired by the Hanoverian stallion Burlington (by Brietling) and from a Woodlander motherline that has also produced the stallion Woodlander Wavavoom. 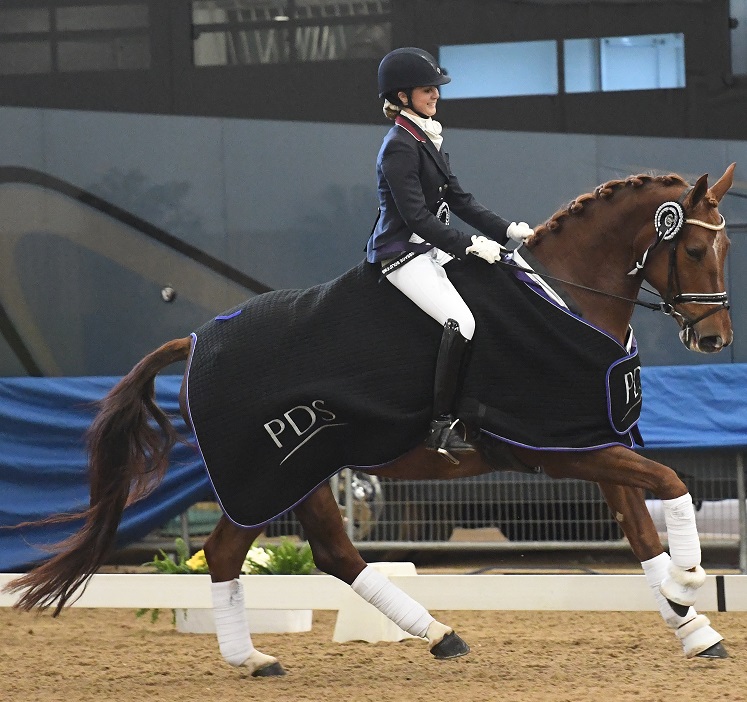 A mare from the first foal crop bred by Week Orchard Stud in Cornwall, was the highest scoring British bred of the Championships with a score of 74.29%. The Oldenburg bred Richelshagen is now retired and dam sire Fulton was a stalwart of Westpoint Stud for many years.

The Showmaker gelding was bred by rider Tahley Reeve-Smith’s mother Susan, who also bred his dam. Tahley also used to compete his damsire Sharola Rainmaker so knows the family well.

Purchased just backed from breeder Sarah Ansty, this black gelding is a son of the Swedish Warmblood stallion Sandro’s Dancer (Sandro Hit x Master) who used to stand at Hartpury.

This young British bred Hanoverian first caught the eye at the BEF Futurity in 2011 where he was awarded a High First Premium. After a successful 5yo career, including 3rd place at Hickstead in the National 5yo Championship, he has now won a first National title for Cheshire based breeder Sandra Tinker.

His sire Sarkozy stood at the famous Schockemohle stallion station and was known for good nature and excellent walk. The damsire Rohdiamant adds in greater ridability and was himself one of the cornerstones of Oldenburg dressage breeding.

This Welsh bred son of Grand Prix stallion and British Breeding legend Demonstrator was purchased as a 3 year old directly from his breeder. 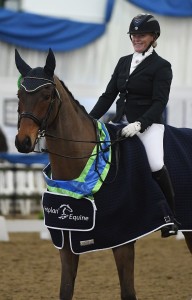 Rider Theresa Smyth scored a personal best to take the title with a horse she has high hopes off. Francisco’s sire Fontainbleu was the champion of his Hanoverian licensing in Germany and also competed at Grand Prix, and is now retired from stud duties.