The second half of the Badminton draw sees a total of only 6 British bred horses competing.We have to wait until the 13th horse to start the second day of dressage before a British bred horse comes down the centre line. Harry Dzenis rides Xam, a SHB(GB) registered son of the influential Thoroughbred stallion Java Tiger. Bred in Cornwall by Mrs Bolitho out of an unregistered mare, Xam completed Badminton last year.

The next British bred contender is the world class mare Classic Moet bred by Elaine Hepworth. Her pedigree is an example of traditional British eventing breeding. Her sire Classic sired a number of decent eventers and show ring winners (such as 2015 RIHS winner High Treason), and although he hailed from the North American sire line of Northern Dancer, he had very interesting French blood on the dam’s sire through Sicambre (who has been seen in eventing pedigrees).  Classic is still available through frozen semen. 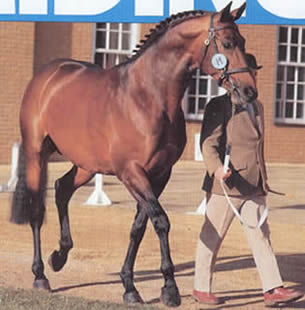 Another mare is Millthyme Corolla, bred by Lester Miller. She represented the Netherlands at the London Olympics and in the European Championships the following year. By the AES licensed stallion Millthyme Cappuccino, whose great grandsire was the Cleveland Bay Knaresborough Warlock. There is quite a lot of Selle Francais influence in the pedigree too, both through the dam side of Millthyme Cappuccino (a double cross to Duc de Normandie), and also through Millthyme Corolla’s dam sire Dallas. Dallas was a big influence on British breeding being the sire of the successful show horse sires Cameo’s Reflection and Dexter the Fourth, the show jumping stallions Hello Oscar and Handley Barns Grandee and the Burghley winner Diamond Hall Red. Cameo’s Reflection is also the sire of Whitson who is also competing this weekend. 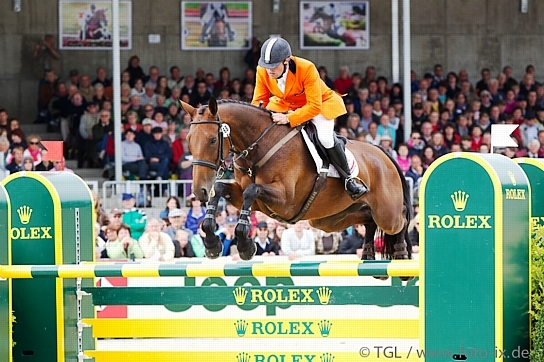 It is a little harder to find out much about the pedigree of the next British bred mare, Lets Dance. The AES registered mare is owned and bred by Ruth Williams, and is a daughter of the AES licensed stallion Croft Another Love, who carries the show jumping bloodlines of Grannus and Farnese.

Louise Harwood’s second ride of the event, Mr Potts, is also her second British bred ride. The son of the ISH stallion Old Leighlin was bred by Louise’s mother Jackie Skelton. Mr Potts carries quite a lot of Irish Draught blood through grandsires Laughton’s Flight and Roma Diamond Skip, but it is his Thoroughbred influenced dam line that is most interesting.  His grand dam Gerfuffle also produced the full brothers Bit of a Barney and Partly Pickled who completed both Badminton and Burghley.

Another rider with two British bred rides is Izzy Taylor. Her second ride is the mare Allercombe Ellie owned and bred by Susie Holroyd. This is another mare with a classic British pedigree, being by the leading sire of eventers for many years, Jumbo, out of a mare by the HIS stallion Poetic Justice. The dam line is a stellar one, with the grand dam being a Grade A show jumper and the great grand dam (Little Mermaid) a Badminton horse in her own right. 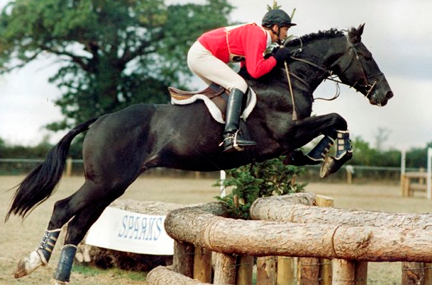 Jumbo, a legend in eventing breeding

What is a little sad is all of the stallions who have sired a British bred competitor in this year’s event, are dead or no longer breeding, and very few have any frozen semen available. This may mean the pedigrees of the 2016 Badminton crop will have little influence on the breeding decisions of eventing breeders today. Or it can be an indication of the need to not lose sight of what has worked in the past in breeding top event horses – mixing Thoroughbred stamina and bravery, combined with a sprinkling of jumping blood and a solid dam line.