The weekend of the 30th September saw two British studbooks run their annual stallion licensing at the very impressive venue of Home Farm, Hothorpe in Leicestershire.

The British Hanoverians were graded on the Saturday with 4 stallions forward seeking approval and 2 young colts coming for a pre assessment.

The first colt was a yearling by the British based Flammengold out of a Dimaggio mare. He was very tall, with good bone and a rangy frame. He opened his shoulder well but could have been a little quicker behind. The second colt was a small 2 year old by Dimaggio x Riverside. He has a well set on head and neck but is slightly weak in the hocks.

There were 4 stallions presented for licensing ranging from 2 to 10 years old. The highest scores of the day were given to the well grown 2 year old Wild Love Woodlander.  A son of Wild Child (Wavavoom x Farouche) out of the For Compliment mare For Your Love, Wild Love is line bred to the lovely mare Louisiana. She is both the dam of Wavavoom and the dam of For Your Love.

A tall chestnut, with a well set on neck, he showed a lot of power in his movement. The front leg is particularly impressive with a lot of reach and lift in both trot and canter. He moved very straight as well which can be rare in horses with such an extravagant front leg. His loose jumping was a little deliberate and he has quite a hot temperament, but there is no doubt he is a very interesting new young stallion. 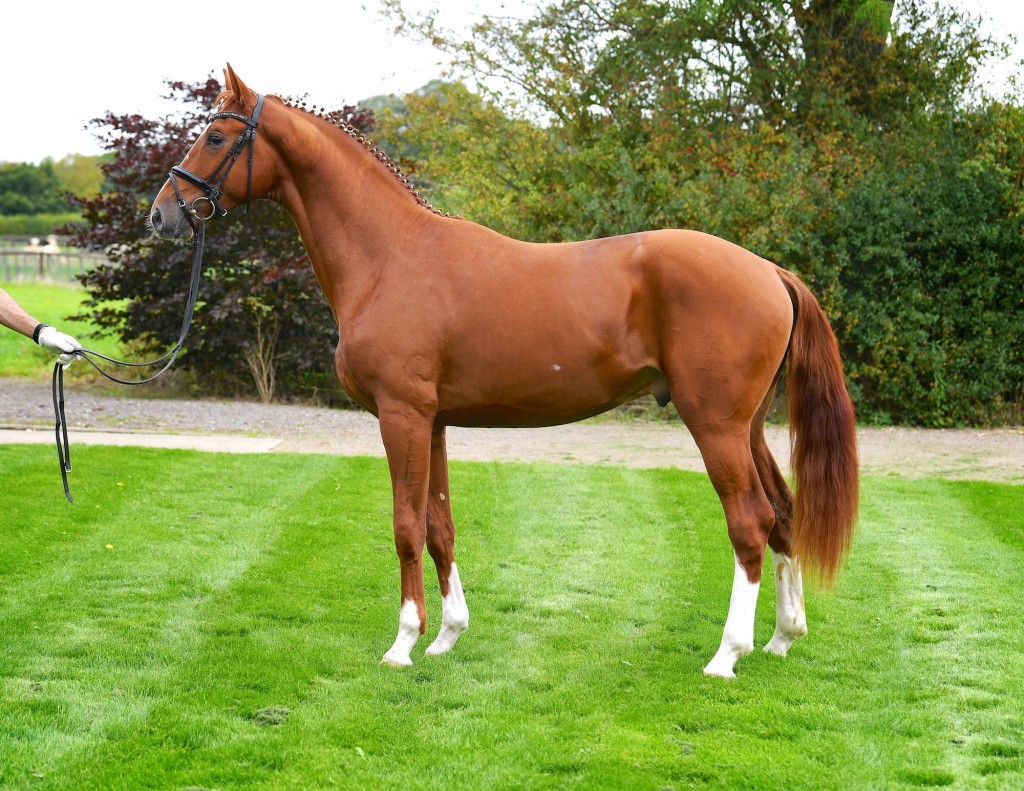 The other 2 year old to license was Facinize by For Romance x Don Frederic x Lauries Crusador. His State Premium dam was purchased from Germany in foal. He was very elastic, and athletic off the floor. He was not as powerful or mature as Wild Love but this athleticism meant he was good through the jumping lane. I would have liked to have seen a little more tucking of the pelvis.

The only 3 year old forward was the BWBS graded Duke of Deerleap but sadly he had to be withdrawn. From what was shown, he has matured a lot since the Spring with a very strong frame and nice topline.

Another BWBS graded stallion who was hoping to add Hanoverian approval to his credentials was Don Dante. This son of the late Dancier has a super competition record and was competing at the BD Nationals just a few weeks ago at both PSG and Inter 1. He was assessed both on the hard surface and under saddle.The judges did comment that he is not such a modern stamp as the first two, but I don’t think the short strong cannon bones and normal length pasterns are bad traits to have at all. He is not over tall and very compact in the frame, with lovely freedom of his shoulder and cadence. He could be a little quicker in the hind leg but showed nice clean tempi changes and well sat pirouettes.

Sharing the set up with the BHHS were the British Warmblood team, who assessed 9 stallions over the 2 days.  All the prospects were assessed on Saturday on the hard surface and then loose jumped. On Sunday morning they were shown on the triangle and then loose before a final walk ring for each age group. All stallions also had to stable overnight and owners were aware that any evidence of stable vices would also be noted.

3 x 2 year old colts were put forward. Wild Love Woodlander was again approved and named Champion, crowning a very successful weekend for the team. The other 2 year old was the Scottish bred Romanno Danteno. This black colt was surprisingly modern in type given his pedigree of Dante Weltino x Donnerhall x Argentinus, who would all be expected to add a lot of substance. The judges did comment that he wasn’t perfect in the front leg (dishes), but that his 3 excellent paces and athleticism made up for that. Dante Weltino is already a major force in International competition at only 10 years of age and combines the blood of World Number 1 De Niro with 2 crosses to Weltmeyer.

Of the 2 x 3 year olds that were presented, it was the Fidertanz son Myspires Fider Hit that was approved. As his name suggests this elegant little stallion is out of a Sandro Hit mare. The damline goes back to Elite mare Verona and is a line that has produced a number of licensed stallions and sport horses. Fidertanz competed up to Grand Prix himself and among his sons can count the very exciting Franziskus (Ingrid Klimke) and Feuerspiel.  The judges commented that this was a very nice horse in all aspects, with the only weaknesses being upright hind feet.

2 x 4 year olds were presented, and it was Silver Don who was approved and also named Vice-Champion. This compact chestnut has already some success under saddle in Young Event horse classes and presented himself very professionally at all times. He is a son of Silvio I, best known as the sire of the great Shutterfly. On the dam side contains mainly Dressage blood, through the De Niro son Der Lord, and through Hitchcock, probably best known as the damsire of Carl Hester’s Barolo.  His dam Donna Rosa is the half sister to the dam of Highcliffe Apollo, the great stalwart of British Junior and Young Rider Championships. The damline has also produced some Grand Prix dressage horses and CCI eventers and the late British based stallion Lord Luis.

One older horse was presented and approved. This was the 9 year old tobiano stallion Volatis Defiant. I have to declare that this is my own stallion, homebred and owned in partnership with the members of the Defiant Syndicate. He had a very successful competition record with his previous owners and the judges commented on his super attitude, charm and over the fences. Their only negative comment was that when they first saw him at the trot up he wasn’t as impressive but that he then impressed them more and more each time he came before them.

Defiant is a son of the stallion Showmaker (Show Star x Fidermark) who was very successful in young horse classes. The damline combines the HOYS champion Stanhopes Dueka with old English Thoroughbred blood through Handsome Sailor and Royal Palace.

There was one pony colt presented and accepted. This was Beverley Brown’s Godrics Decoy, a 2 year old son of Danger out of a mare by the leading dressage pony sire Caesar. Both Danger and Caesar are based by Beverley’s Godrics Stud, part of Leamside Equestrian Centre and both have competed on European pony teams.  In the third generation is the highly successful dressage sire Don Primero (sire of Dimaggio). Although still a little immature, this colt impressed the judges with his super hind end action, both over the fences and on the flat.