The highlight of the whole week from a breeding point of view has to be crowning of Hayley Watson-Greaves as the new Lemieux National Champion on her British Hanoverian WG Rubins Nite. Although just pipped to the post in the freestyle by Carl Hester and Alcazar and by Lara Butler and Rubin Al Asad in the Grand Prix, Hayley’s consistency over the two days, was well rewarded. 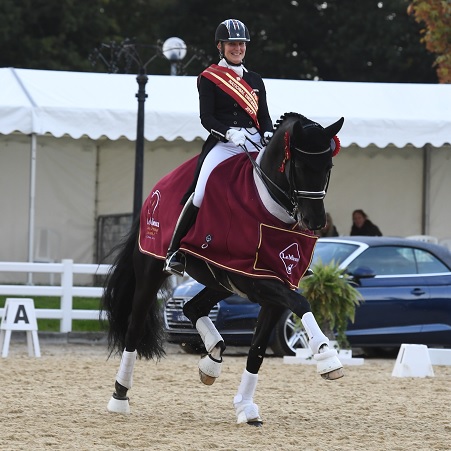 WG Rubin’s Nite is by the Grand Prix stallion Rubin Royal who is becoming a serious force as a sire of top horses in his own right. He has been moving steadily up the WBFSH leaderboard, into 4th place in 2016. He is a son of Rohdiamant (Rubinstein x Inschallah AA) out of the famous mare line of Rudilore that has produced more than 25 licensed stallions including 5 other full brothers to Rubin Royal such as Blue Hors Romanov and Rubin Action.  What makes Rubin Royal an interesting stallion to me is that he is not a foal maker, but a Grand Prix maker and passes on lovely type as well as that famous ‘R line’ trainability.

WG Rubin’s Nite is out of the mare Little Wixi, by Limbo who stood in the UK for a number of years, and was bred by E Richmond-Watson. Although German bred Rubin Al Asad is also by Rubin Royal.

There were 4 other British bred competitors entered in the Grand Prix: Spring Pascal by the Hanoverian Pascal out of a Cleveland Bay mare; Saskia Hit, homebred by rider Liz Diegutis by Sandro Hit out of an Akzent I dam; Into the Blue, bred to show jump by Ublesco out of a Calvaro Z mare; and the stallion Aldborough Rubenhall, another from the ‘R line’ by Rubioso N.

This class was once again dominated by Charlotte Dujardin, who took the title on Emma Blundell’s mare Mount St John VIP, and second place on Sarah Tyler Evans’s homebred AES registered River Rise Nisa. This 6 year old mare is a daughter of the Ferro son Negro, of course most famous as the sire of Valegro. Her dam Nicky is a daughter of the little known stallion Amsterdam, who is himself a son of the fabulous dual purpose Argentinus.  Nicky hails from a solid Dutch motherline that has a produced a number of good show jumpers. Nicky herself is the dam of the Grand Prix horse Tatler who is by Nisa’s grandsire Ferro and she is herself half sister to another Ferro sired Grand Prix mount Power.

In total 16 out of the 34 entries were British bred. 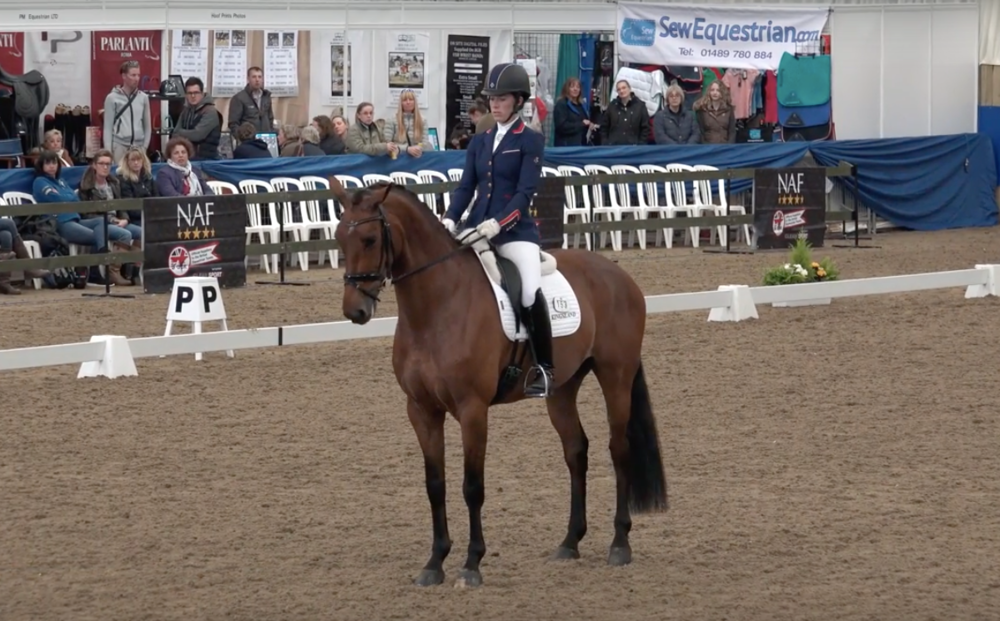 The advanced medium was not quite as successful for British stock, with 11 qualified and the highest placed being 5th placed Michael Eilberg and Daltrey. Daltrey was bred by Lynne Crowden of Woodlander Stud out of her foundation mare Savannah. Savannah was the dam of two stallions – Woodlander Rockstar and Woodlander Wesuvio, and the Elite mare Foxy Lady. Daltrey’s sire was the British based Hanoverian stallion Desert Moon, a son of the WBFSH Number 1 Dressage sire De Niro.

Another class dominated by Charlotte Dujardin, who took this title on her Dutch bred gelding Gio, and the British bred River Rise Nisa again taking the Reserve Champion’s title.

To see British bred winners at every level from Preliminary through the Young Horse Championships and all the way to Grand Prix, is a fabulous result for a nation that has far far fewer broodmares than the powerhouses of Germany and Holland. To also see some of the best rider’s in the world, choosing to ride British bred stock, is the best advertisement there could be.