Every year we focus on the British bred contenders lining up for the Mitsubishi Motors Badminton Horse Trials – one of the pinnacle events of modern eventing. Any serious eventing breeder dreams of seeing a homebred horse gallop past Badminton House on cross country day, and for the lucky few listed below, that dream will come true this weekend.

First up is Xam, is a 17-year-old SHB(GB) registered gelding. Bred by Mrs A Bolitho in Cornwall he is by the former leading thoroughbred event sire Java Tiger (Mrs Bolitho is also the breeder of former our-star horse Tigers Eye II also by Java Tiger). Java Tiger is the sire of many event horses including Mistatiger, Catch the Tiger, Feast of Florios and is the dam-sire of Opposition Buzz. Xam’s dam was a driving mare of unknown breeding.  Xam will be ridden by long term partner Harry Dzenis

It will be a first Badminton for local girl Alicia Hawker and her grandfather’s Charles RR  who is an 11-year-old British-bred AES registered gelding. Bred by Peter Teasdale he is by the international show jumper Verdi (European and WEG team gold medalist for Holland) of a mare by the former showjumper Didi. The pair completed their first four-star at Pau last year. 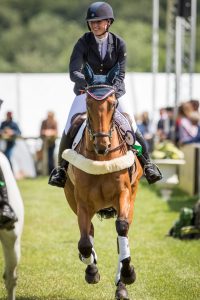 Irishman Padraig McCarthy has the ride on Mr Chunky, a 13-year-old British-bred SHB(GB) registered gelding. He is by the incredibly successful sire Jumbo. Jumbo was fairly unique among eventing sires in that he competed to advanced level himself (including winning at Lion D’Angers), in a sport that stallions tend not to dominate in. By the Irish Draught sire Skippy out of the showjumper Betty, who was by the thoroughbred Seven Bells, Jumbo sired 45 advanced horses, including Avebury ( 3 times Burghley winner), Henry Tankerville (Braham winner), Skylight (European Young Rider Gold Medallist) and Allercombe Ellie (short list Rio Olympics) and graded stallion Philanderer II (European Young Rider Team 2017). Mr Chunky is out the thoroughbred mare Avin Fun Bar by Sergeant Drummer. He was bought from his breeder Sue Trump by Lucy Wiegersma and produced by Lucy to four-star level – the pair completed Burghley in 2015 – and Padraig took the ride at the beginning of 2016.

Following Mr Chunky out of the starting box is Mr Potts and Louise Harwood. Mr Potts is a 16-year-old homebred gelding, bred by Louise’s mother Jackie Skelton. He is by Old Leighlin, an Irish Sport Horse that stood in the UK and sired several good event horses including Rumpy Pumpy and Trefeinin Angel. Mr Potts dam, Much of a Muddle, is by the ID sire Roma Diamond Skip. Much of a Muddle is the half-sister to Louise’s former four-star rides and full brothers Bit of Barney and Partly Pickled who both completed Burghley and Badminton.

Carole Warren’s Bronze Flight is a 19-year-old son of the AES stallion Dynasty (by Dompfaff). He was bred by Fiona Menzies, close to Badminton and is by out of a mare by the British-bred stallion Flying Dutchman – a son of Dutch Courage who proved to be such an influence on British dressage and eventing breeding. Bronze Flight is ridden by Irish amateur Alan Nolan.

Brendonhill Doublet and Imogen Gloag  came through pony club ranks together and were selected for the Junior European Championships. Doublet is by Future Role and was bred by Brendon Hill Stud in Somerset, who over the last 50 years have been one of the leading British breeders of event horses.

Pippa Funnell is riding the homebred Billy Beware a son of the 2014 World Number #1 show jumping sire Kannan. His dam Dollar Day is a daughter of Cavalier Royale (World Number #1 eventing sire in 2008). Billy Beware is a full brother to Billy Grand who won the Queen Elizabeth at the Royal International. 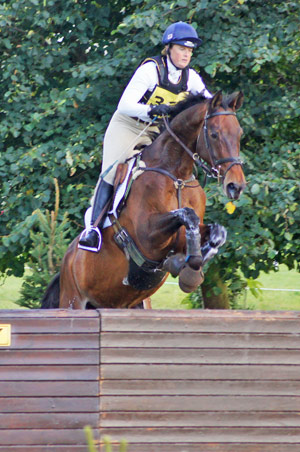 Hannah Matthews of Woolaston Stud is the proud breeder of the 13-year-old grey gelding Triple Chance. A three quarter Thoroughbred, Triple Chance is by  Lan Garth Triple who evented himself to Intermediate level and produced a lot of good part bred Welsh offspring for Lan Garth Stud. His damsire is the thoroughbred Joli Wasfi. He has been produced up the grades by Ashley Edmond.

Classic Moet, owned by Trisha Rickards, is one of the best mares in eventing. Bred by Elaine Hepworth  and ridden by Jonelle Price. Her pedigree is an example of traditional British eventing breeding. Her sire Classic sired a number of decent eventers and show ring winners (such as 2015 RIHS winner High Treason), and although he hailed from the North American sire line of Northern Dancer, he had very interesting French blood on the dam’s sire through Sicambre (who has been seen in eventing pedigrees).  Classic is still available through frozen semen. 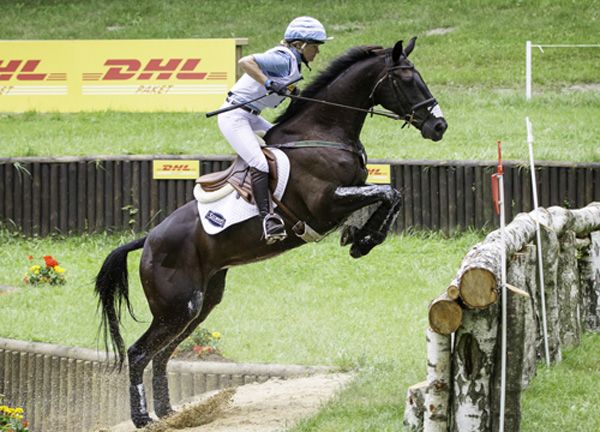 Nana Dalton’s Absolut Opposition  is a 13-year-old gelding bred by Rosie Glaister. He is by the well-known Trakehner eventing sire Fleetwater Opposition (sire of many eventers including former team horse Opposition Buzz, the stallion Yarlands Summersong, and Wellshead Fare Opposition). He is out of Ruffo’s Star who was by the thoroughbred Ruffo, sire of Riva Ruel ridden by Nana’s sister Patricia Price to complete Badminton in 2005.

The next two British bred horses taking on Badminton are both sons of Mill Law. Mill Law produced a number of advanced eventers and was also a leading sire of BEF Futurity entrants. Mill Law was purchased as a yearling by his owner Sue Browne, was by the HIS stallion Samiel out of a part arab mare. He was known for his wonderful temperament and evented himself to advanced level with Sue’s daughter Nicola.

Emilie Chandler brings her long term partner Coopers Law. He is one of seven offspring for the mare Miss Cooper who was by the Irish Draught stallion Kildalton Gold (the damsire of Ballincoola). He was bred by owners Nicola Dickson and Sally Wiliams and was bred to be a family horse. Emilie and Coopers Law completed Burghley and were placed at Pau last year. 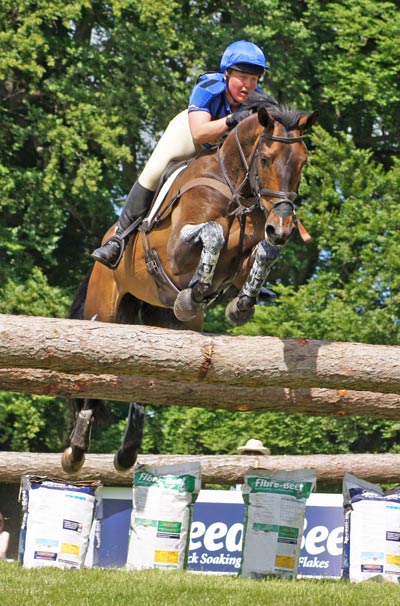 The second Mill Law offspring is Bradley Law ridden by Michael Owen. Bred by his owner Jane Jennings, his dam is of unknown breeding.

The final British bred entrant is Alexander Bragg’s second ride Redpath Ransom. He was bred by Adelle Brabham and is by John Whitaker’s former international showjumper Randi out of a mare by the Irish thoroughbred Euphemism.

None of the sires of the horses listed above are currently alive and standing in the UK, just going to show that eventing breeders dont have the luxury of waiting for 4-star results of offspring when choosing a stallion. However there are some very exciting horses in the field who although not British bred, are by British based stallions. Oli Townend has his aim set on the Grand Slam if the Ramiro B sired Cooley SRS can add the Badminton title to Oli’s Burghley and Kentucky titles. Georgie Strang has another Ramito B son in Cooley Earl. Ramiro B stands at Stallions AI in Shropshire.