Only 11 British bred horses came forward to start the dressage phase of the 2019 Badminton Horse Trials. With last year’s victors Jonelle Price and Classic Moet not defending their title this year, we look at some of remaining British bred contenders who we hope can keep British breeding in the headlines.

Probably our best hope based on 2018 form is the wonderful Mr Chunky, last year’s World Equestrian Games individual silver medallist with Padraig McCarthy. Bred by Sue Trump, the son of the legendary Jumbo is owned by Huw Lloyd, Christopher & Sarta Perkins, and Padraig’s wife Lucy. A score of 31.2 after dressage leaves the 14 year old SHB(GB) registered gelding in 22nd place .

A breeder himself, Padraig and Lucy set up MGH Sporthorses in 2014 and their 2019 foal crop looks like it could produce Padraig some future stars with foals expected by My Chunky’s sire Jumbo out of a Presenting mare, and one due out of the Jumbo daughter Jonella, full sister to the licensed stallion and 4* eventer Philanderer.

The highest placed British bred horse after dressage however is Pippa Funnell’s ride Billy Walk On lying in 5th on 26.5. And just a hair’s breadth behind Mr Chunky is his Billy Walk On’s half brother Billy Liffy, who is ridden and partly owned by Australian Sam Griffiths. Both Billy Walk On and Billy Liffy are products of Donal Barnwell and the Funnell’s Billy Stud. Billy Liffy is an AES registered son of Billy Congo and Billy Walk On is by Billy Mexico. To have two half brothers both performing so well on the first day is a fantastic achievement for their dam Shannon Line, whose impressive production record we shall explore in more detail another time. 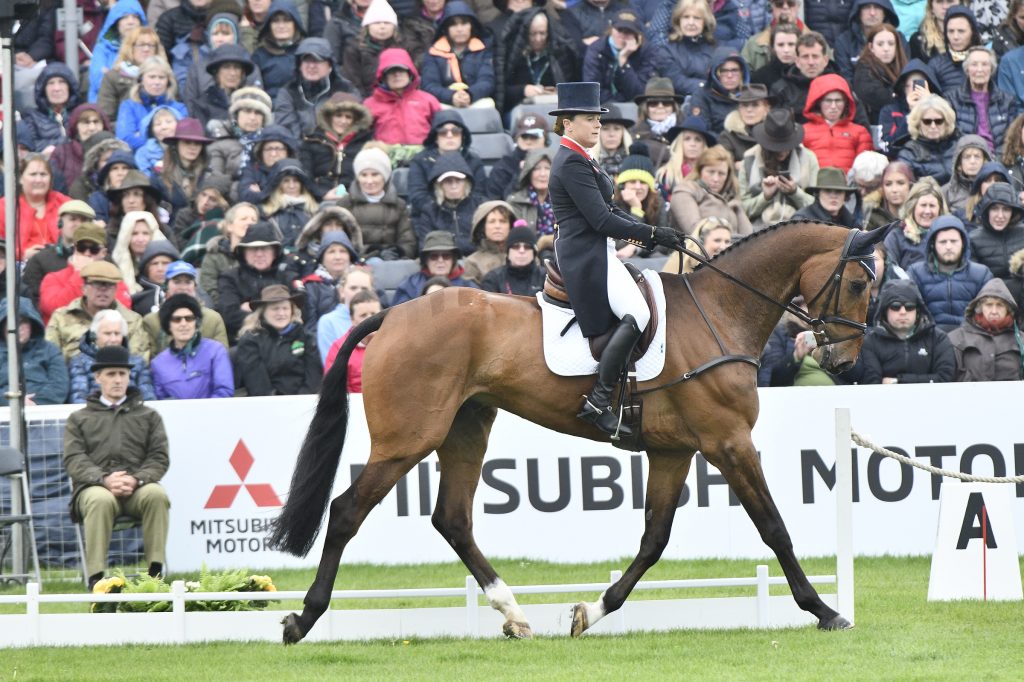 Everybody loves watching William Fox-Pitt back competing at the best 5 star events and he lies on a score of 34 after dressage on Oratorio. Bred by Tessa Clarkson Oratorio is a son of  Oslo Biats who William also evented, winning Pau as a 9 year old. He was a son of Olympic show jumper Lando with an Anglo Arab damsire. Oratorio’s dam is a Thoroughbred daughter of Topanoora with the very important influence of Sharpen Up further back. 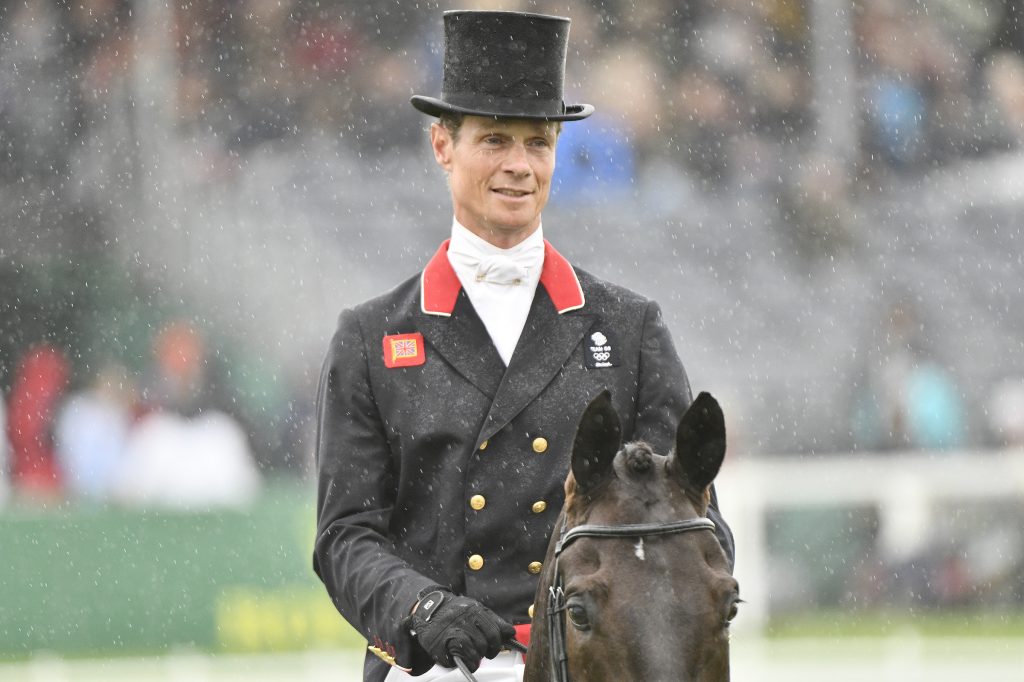 A son of the top British bred eventing stallion Weston Justice is Templar Justice, a Badminton first timer with Katie Preston. Bred by Amanda Rolfe the 15.2hh 12 year old has a fairly classic British eventing pedigree being out of a 3* daughter of Welton Crackerjack. Katie is a full time vet and has completed Luhmulen and Burghley with Templar Justice as well as representing the UK at Lion D’Angers. Their score of 36.9 after dressage leaves them in a tightly packed mid division with cross country to come.

On 38.9 penalties is the Balfour’s homebred mare Liberty and Glory ridden by Tom Crisp. A very attractive mare by the Brendon Stud’s stallion Caretino Glory out of a Thoroughbred mare. The combination were 6th at Pau last year.

There are a few British bred horses with scores in the 39 penalty range after dressage. These include; the part bred Cyldesdale Harelaw Wizard (by the Thoroughbred Endoli) and Ben Hobday; the ex hunter and team chaser Carryon Bobby Boy (by British based sire Lauriston) and Julia Norman and the show jumping bred Charles RR and Alicia Hawker (Verdi x Didi). 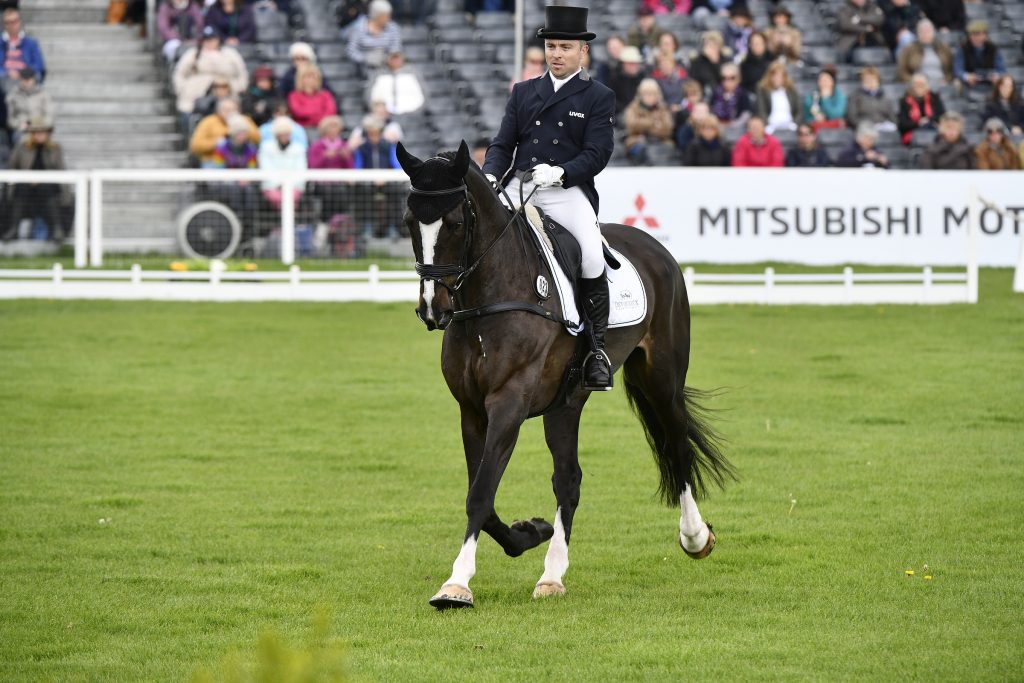 Sadly tension in the dressage phase left both Hanleen Crown Jewels and Bradeley Law propping up the dressage leader board, however both these horses have strengths in the jumping phases. Hanleen Crown Jewels was bred in Scotland by Harry Aird and although is registered as a Scottish Sport Horse has unrecorded breeding. Bradeley Law’s rider Michael Owen had a tough ride on the flashy Mill Law son but he acknowledges the SHB(GB) registered gelding does not like the crowds at these big events and will fare much better galloping through the parkland tomorrow.

After the dressage phase was completed, 12 SHB(GB) graded stallions paraded with a good number of spectators braving the rain and hail that brought Friday to a conclusion. These included some fabulous quality animals that breeders who have an eye on a future Badminton contender would do well to consider. These included past Badminton winner Chilli Morning, leading young sire, eventer and PSG dressage horse Timolin and the Cavalier Royale grandson Hallmark DS.

What we need is to ensure more of our top riders start shopping in the UK for their future top rides. With an artist such as Oli Townend having the top two at the end of dressage, and lovely tests also by Piggy French, Laura Collett and others, what do we as a breeding industry need to do to ensure we are breeding, and then producing the horses that these riders want their owners to buy. With my Breeding British hat on, tomorrow I am going to be cheering on Pippa, Padraig, William and the other riders who are proving you can be competitive at the greatest events on a British horse.